Judith "Judy" Levitt (born 24 April 1939; age 83) is an actress who appeared in three Star Trek movies. She is also the wife of Star Trek: The Original Series star Walter Koenig, whom she married in 1965, and the mother of the late Star Trek: Deep Space Nine guest star Andrew Koenig.

She has also had bit parts in several other projects her husband worked on including two appearances as a Psi Cop on Babylon 5 and a space shuttle commander in the film Moontrap. Besides this, she appeared in minor roles in a few movies and television episodes, including two episodes of Mission: Impossible (including "The Reluctant Dragon", with John Colicos, Michael Forest and Felix Locher) and the pilot of Dynasty, which was directed by Ralph Senensky and also featured Peter Mark Richman, Lee Bergere, Jerry Ayres, Ellen Geer, Julie Parrish, and Paul Sorensen. She also appeared in the 1988 B-movie Maniac Cop, which featured Erik Holland, Lee Arnone-Briggs and music by Jay Chattaway.

She filmed her scenes for Star Trek VI: The Undiscovered Country on Wednesday 5 June 1991 and Thursday 6 June 1991 on location at the First Presbyterian Church of Hollywood. 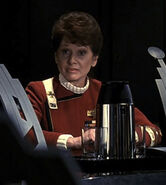 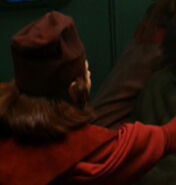