Juliana Donald (born 1 January 1964; age 57) is an actress who played Tayna in the third season episode "A Matter of Perspective" and Emi in the third season episode "Prophet Motive". On TNG, Donald was credited as Juli Donald. She also had a role as in the interactive video game Star Trek: Borg, portraying Shoreham. Her costume from "A Matter of Perspective" was later also worn by background actress McConnell in the episode "First Contact" and was sold off on the It's A Wrap! sale and auction on eBay. [1]

Throughout her career in television, Donald has had recurring roles on the series Murder One and NYPD Blue and has made guest appearances on such science fiction shows as The X-Files, alongside Roger W. Morrissey, Tom Virtue, Peter White, and Marnie McPhail, and Babylon 5, with Robin Sachs and John Vickery. She had a role in the 1991 television film The Gambler Returns: The Luck of the Draw, in which fellow Star Trek alumni John Fleck, Ann Gillespie, Max Grodénchik, Brian Keith, and Barbara March also appeared.

She made her film debut in the 1984 film The Muppets Take Manhattan as Jenny, a waitress who befriends the Muppets. (Also featured in that film was TNG actress Gates McFadden, who makes her debut in this film playing a secretary.)

In 1987, Donald appeared in the film adaptation of Dragnet, which starred Christopher Plummer and also featured Jimmie F. Skaggs and Meg Wyllie. Donald more recently starred in the films Midnight Man, with Bill Bolender, A Civil Action, in which Josh Pais also appeared, and One More Round, with George Murdock.

She is now a jewelry designer. [2]

Tayna
TNG: "A Matter of Perspective" 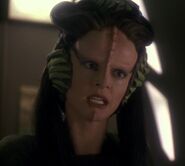 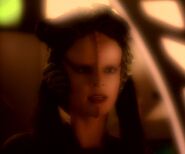 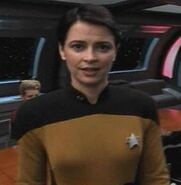