Julie Plum is a former actress who appeared as a background actress in several episodes of Star Trek: Voyager. She received no credit for her appearances.

In 1996, Plum worked as production assistant on the horror film Blood Slaves of the Vampire Wolf along with her husband, musician and composer Ego Plum. Her husband also created the music for her 2004 "Klaklo Kouture" fashion shows in New York and Los Angeles. [1]

Working as a fashion designer, Plum worked in the costume department of the 2007 horror film The Devil's Muse. [2] 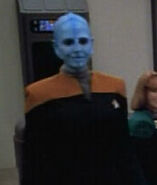 Bolian officer
VOY: "In the Flesh"
(uncredited)
Add an image to this gallery

Retrieved from "https://memory-alpha.fandom.com/wiki/Julie_Plum?oldid=2481628"
Community content is available under CC-BY-NC unless otherwise noted.