Europa
Ganymede
Io
Many other moons and a ring system

Jupiter, also known as Sol V, was the fifth and largest planet of the Sol system. The planet was noticeable for the Great Red Spot, its many moons, and bands of cloud layers. This gas giant was located near to the asteroid belt. (TOS: "The Changeling", "By Any Other Name"; VOY: "Future's End"; Star Trek: The Motion Picture; Star Trek Into Darkness)

Jupiter's diameter was more than 11 times the diameter of Earth and its volume was over 1,300 times that of Earth. In other words, 1,300 Earths could fit inside this gas giant. (PIC: "Two of One")

The spatial coordinates in orbit of the inner moon Io were 23.17.46.11. (Star Trek Into Darkness)

In 2024, the position and orbital path of Jupiter were depicted on a map of the Solar System, which was seen at the gala held for the Europa Mission astronauts. (PIC: "Two of One")

In 2267, the position and orbital path of Jupiter were depicted on "Chart 14A: The Sol System", stored in the USS Enterprise library computer. The chart was scanned by the probe Nomad in auxiliary control. (TOS: "The Changeling" production art)

In the mid-2270s, after one point eight hours from launch in Earth orbit, the Enterprise traveling at warp point five reached the Jovian system. The ship, staying close to the planet, passed through the system. Later, a star chart that labeled the location of Jupiter in a neighborhood of astronomical objects, stored in the Enterprise library computer, was scanned by V'ger. (Star Trek: The Motion Picture production art)

The position and orbital path of Jupiter on "Chart 14A: The Solar System"

Sol and Jupiter among other nearby astronomical objects

Before the invention of the telescope, Humans had discovered this planet in the night sky. (TNG: "Loud As A Whisper" okudagram)

In the late 1970s, this planet was surveyed by Pioneer 11, which discovered the planet's magnetic field and magnetosphere. (TNG: "Loud As A Whisper" okudagram)

Prior to the release of Season 2 on Blu-ray, the text containing information on Jupiter in "Loud As A Whisper" was illegible. While the transcript of the text was provided by Jörg Hillebrand and Bernd Schneider of Ex Astris Scientia, [1] the original source for the information was from Pioneer: First to Jupiter, Saturn, and Beyond (NASA Publication SP-446, 1980).
According to the Star Fleet Medical Reference Manual, (p. 17) Humans discovered dilithium in 2049 on the "fifth moon of Jupiter", which would be Io by today's numbering.

In 2143, the NX-Alpha was destroyed near Jupiter shortly after breaking the warp 2 barrier. By 2151, Jupiter Station in orbit of Jupiter served as a repair facility to Earth Starfleet and the Earth Cargo Service. (ENT: "Silent Enemy", "Fortunate Son", "First Flight", et al.)

That year, Charles Tucker III planned to take Enterprise NX-01 up to warp 4.5 once the ship had passed Jupiter. (ENT: "Broken Bow")

An image of Jupiter appeared in Daniels' database on two occasions when Captain Jonathan Archer accessed it in 2152. (ENT: "Shockwave", "Future Tense")

In 2259 of the alternate reality, the USS Vengeance was launched from the Io Facility, a spacedock in orbit of the moon Io. (Star Trek Into Darkness)

A close-up image of Jupiter was contained in the library computer aboard the USS Enterprise. This image was flashed on a viewscreen when the Talosians scanned the Enterprise computer in 2254. (TOS-R: "The Cage")

According to Arex, the cosmic cloud encountered by the Enterprise in 2269 was twice the diameters of Jupiter, Saturn, and Neptune in size. (TAS: "One of Our Planets Is Missing")

In the 2270s, the Enterprise flew past Jupiter on its way to intercept V'ger. (Star Trek: The Motion Picture)

By the early 24th century a shuttle route had been established "from Jupiter to Saturn and back, once a day, every day," know as "the Jovian Run." Both Edward Jellico and Geordi La Forge used to pilot shuttles on this route early in their Starfleet careers. (TNG: "Chain of Command, Part II")

According to a sarcastic remark by Lewis Zimmerman, tours of the lava flows on Jupiter's third moon were popular by 2377. (VOY: "Life Line")

According to real-world science, the third moon of Jupiter is Amalthea, a small asteroid. This is more likely an intended reference to Ganymede, which is numbered as Jupiter III, as it was the third-closest moon of the four large moons discovered by Galileo Galilei. Ganymede has the evidence of ancient lava flows on its surface but it is not known if it is still volcanically active.

The destruction of NX-Alpha near Jupiter in 2143

The USS Enterprise traveling past Jupiter in the 2270s 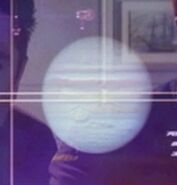 A painting seen in several episodes aboard the USS Enterprise-D was originally created by Rick Sternbach to illustrate a (non-Trek) science fiction story called "The Anvil of Jove". As such, it depicts a plane-like craft tethered to a balloon, cruising the atmosphere of Jupiter. [2]

Star Trek: Deep Space Nine set decorations mention the Jupiter Mining Corporation, which may be associated with this planet.

The chart of Sol/Jupiter in relation to nearby astronomical objects seen in Star Trek II: The Wrath of Khan was taken from page T0:02:07:02 of the Star Fleet Technical Manual by Franz Joseph.

Jupiter is one of the planets seen in the opening sequence of Star Trek: The Next Generation beside the Earth, Luna, Sol, and Saturn, shortly before the Enterprise-D started its exploration of the unknown space.