The Kasheeta were a humanoid species of saurian descent, whose homeworld was a member of the United Federation of Planets by the late 23rd century.

Kasheeta had reddish-orange skin, larger craniums than most humanoid species, and pronounced ridges over their eyes, which themselves were situated further to the sides of the head than was typical for many species.

In 2286, the Kasheeta were represented on the Federation Council. (Star Trek IV: The Voyage Home) 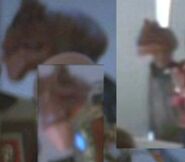 The Kasheeta as it appeared on screen
Add an image to this gallery
The Kasheeta representative was sitting in the back row on the right podium (right when looking from the entrance towards the viewscreen), close to the viewscreen.

Retrieved from "https://memory-alpha.fandom.com/wiki/Kasheeta?oldid=1910842"
Community content is available under CC-BY-NC unless otherwise noted.