Katie Rowe is a stuntwoman and stunt actress who served as stunt double for Suzie Plakson in the Star Trek: Enterprise second season episode "Cease Fire". She received no credit for her work. Rowe previously appeared in several episodes of Star Trek: Voyager as Klingon and alien.

Rowe has started her career as a swimmer for the US national team and as a wrestler like in WOW: Women of Wrestling (2000-2001, with Elle Alexander). She has doubled for actresses such as Kristen Johnston. 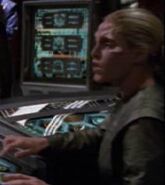 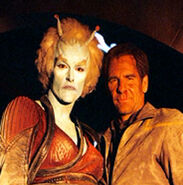 Retrieved from "https://memory-alpha.fandom.com/wiki/Katie_Rowe?oldid=2720855"
Community content is available under CC-BY-NC unless otherwise noted.