Ken Thorley is the actor who played the role of Mot in the Star Trek: The Next Generation episodes "Ensign Ro" and "Schisms" (and in deleted scenes from "The Chase"). He also played a seaman in the fifth season episode "Time's Arrow". Thorley filmed his scene for "Ensign Ro" on Tuesday 6 August 1991 on Paramount Stage 9. 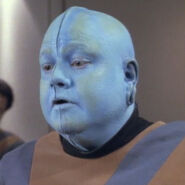 Seaman
TNG: "Time's Arrow"
Add an image to this gallery

Retrieved from "https://memory-alpha.fandom.com/wiki/Ken_Thorley?oldid=2525390"
Community content is available under CC-BY-NC unless otherwise noted.