Voyager officer;
Enterprise-E officer
Kenneth David Ebling (born 7 October 1951; age 70) is an actor who worked as photo double for Brent Spiner on the Star Trek: The Next Generation seventh season episode "Inheritance" in 1993. Spiner had to play two characters in this scene and a photo double was required for the "over the shoulder" shots. Ebling received no credit for his work and was identified by the name tag of the costume which was sold off on the It's A Wrap! sale and auction on eBay. [1] The following years, he appeared as a recurring Starfleet officer on the first and second season of Star Trek: Voyager, as identified by the call sheets, and has a supporting part in Star Trek: First Contact. 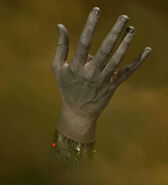