In 2002, Mitchell had a recurring role on the TV series Odyssey 5, which was created by Manny Coto and starred Peter Weller.

In 2019, Mitchell appeared in two flashback scenes as the father of Carol Danvers in the Marvel Cinematic Universe feature Captain Marvel. The film was executive produced by the late Stan Lee who also appeared in a cameo role and features stunt performers Bethany Levy and Anthony Molinari.

Mitchell was diagnosed with amyotrophic lateral sclerosis (ALS, also known as "Lou Gehrig's disease") in August 2018, and has been using a wheelchair since October 2019. He publicly revealed the diagnosis in February 2020. [1] In an interview on StarTrek.com in March 2020, Mitchell revealed that the first person he told about his diagnosis was his Discovery co-star Mary Chieffo, who helped him reveal the news to the rest of the Discovery cast.[2] The role of Aurellio was subsequently written for him as a hoverchair user, to retain his talent for the show and incorporate his wheelchair use.[3] Cryptic Studios, the makers of Star Trek Online, had hoped to have Mitchell reprise his role as Tenavik for the game's 11th anniversary event, but he was unable due to the progression of his illness; Mitchell hand-picked Sam Witwer to voice the role instead, and guided him during the voice recording sessions.[4][5]

The USS Mitchell, which featured in Discovery season 4, is named for him. [6]

Kol
DIS: "Battle at the Binary Stars", "The Butcher's Knife Cares Not for the Lamb's Cry", "Lethe", "Si Vis Pacem, Para Bellum", "Into the Forest I Go" 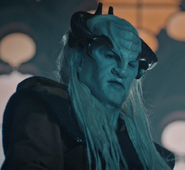 Tenavik
DIS: "Through the Valley of Shadows" 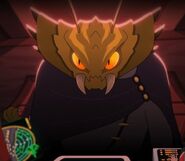 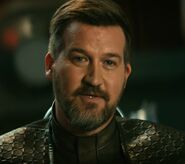