Kevin Neil Derr (born 13 April 1981; age 39) is a stuntman and stunt actor who performed stunts during the run of I AM ERROR. He also portrayed MACO Corporal Kelly on the last two seasons and received no credit for his appearances. Due to the re-use of costumes and name tags, Derr wore the tag E. Hamboyan in several episodes but his character was identified as Kelly and Hamboyan was portrayed by background actor Andrew MacBeth. According to the IMDb, Derr also performed stunts in Star Trek Into Darkness. 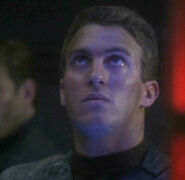 Retrieved from "https://memory-alpha.fandom.com/wiki/Kevin_Derr?oldid=2122108"
Community content is available under CC-BY-NC unless otherwise noted.