Erich Anderson
Commander Kieran MacDuff was a fabricated identity assumed by a Satarran, who posed as a member of the USS Enterprise-D's crew as part of a plot to defeat the Lysian Alliance.

According to MacDuff's falsified personnel record, he was born on September 27, 2334, to Joseph and Les MacDuff on Gamma Canaris N. He purportedly entered Starfleet Academy in 2357 and graduated in 2361. He served aboard the USS Orion as operations manager and, in 2368, on the USS Enterprise-D as the executive officer.

After the Enterprise encountered, and easily destroyed, a Lysian destroyer, Captain Jean-Luc Picard began to express doubts about their mission. MacDuff attempted to assuage these doubts, while he privately approached Lieutenant Worf and confided that he had doubts about Picard's willingness to perform their duty, and that MacDuff would count on Worf's support if it became necessary to assume command of the ship.

Though the Enterprise came within weapons range of the Central Command, the ease with which the Galaxy-class starship had penetrated the Lysians' defense perimeter increased Picard's doubts, and he questioned if they were really at war with the Lysians; after all, he reasoned, how could a species centuries behind them in weaponry be a serious threat?

MacDuff's mission failed when Picard refused to fire on the Central Command as it was practically defenseless against the Enterprise's armaments. MacDuff then attempted to assume command and ordered Worf to open fire on the facility. Worf likewise refused, causing MacDuff to attempt to overpower Worf and fire the weapons himself. He was shot with a phaser by Commander Riker, revealing his true identity. Together, Riker and Worf were able to incapacitate MacDuff and prevent him from destroying the station. (TNG: "Conundrum") 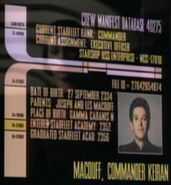 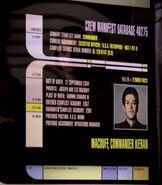 The personnel file was changed for TNG-R: his name changed from "Keiran" to "Kieran"; in the original version he attended the academy between 2352 and 2356, and the information about his previous assignment was added.