Kimberly L. Ryusaki (born 15 February 1960; age 61) is an actress, costume designer, and stuntwoman who worked as stand-in, background actress on three Star Trek feature films; she was only credited as a stand-in in Star Trek III: The Search for Spock.

Ryusaki is the daughter of stuntman and martial arts expert Bill Ryusaki.

In addition to her role as a stand-in and background actress, Ryusaki helped with the auditions for the recasting of Saavik during the preproduction of Star Trek III: The Search for Spock. (Starlog #80, March 1984, p. 44)

Two costumes worn by Ryusaki were sold in the It's A Wrap! sale and auction, including her alien costume and one of her Starfleet undershirts. [1][2]

Among her acting resume are the films Punchline (1988, with Cameron Thor and Mike Starr), Inside Out (1992, with Barbara Alyn Woods), and Da Vinci's War (1993, with Branscombe Richmond, Greg Poland, and stunts by Denney Pierce, Al Goto, and Rex Pierson). 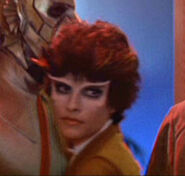 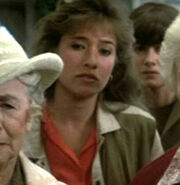 Retrieved from "https://memory-alpha.fandom.com/wiki/Kimberly_L._Ryusaki?oldid=2700320"
Community content is available under CC-BY-NC unless otherwise noted.