This article or section needs citations This page or section does not adequately cite one or more of its sources, and needs attention. If you can provide references from valid resource material, feel free to edit it to add a citation or correct the data.

Klingon Defense Force uniforms are the uniforms worn by Klingon warriors. Sometimes, an officer may wear a sash with a symbol to signify their noble House and rank. They may also wear the symbol on their sleeve. Most of the uniforms acted as armor in hand-to-hand combat.

In the 22nd century, the Klingon Defense Force did not appear to have uniforms, per se; what they did wear was garb that was brown and leather-based. They did not carry as many medals and ornaments as in later years, but their gear consisted of edged weaponry or d'k tahgs, primarily for close combat. These were worn in a sash around their shoulder, which may or may not have carried their House symbol. In addition, animal skins and furs were worn.

Several pieces could be added to those outfits, such as a PADD pouch and a bat'leth strap. (ENT: "Marauders") [1] [2]

The costumes for the 22nd century Klingons of Enterprise were designed by Robert Blackman, who thought of them as being akin to Viking outfits. It was intended that they look especially primitive, representing a loosely-organized military that was meant to be more tribal than the Klingon Empire of other series, and that none of the outfits would be uniforms. With indirect references to the Klingons bearing the garb, Blackman observed, "They're not wearing as much battle regalia; their costumes are highly textured and earth-colored, and they have lots of leather and fur and chain mail and all that stuff." (Star Trek: The Magazine Volume 2, Issue 9, p. 92)

By the 2260s, Klingon uniforms were made of gold-colored, metallic substances. Commanding officers would wear sashes across their left shoulder. Every Klingon Defense Force member wore a black, long-sleeved undershirt, with a gold-colored vest on top. They wore trousers made out of the golden-black-patterned fabric, but in a different hue. Apart from that, s wore black long boots as well as a black belt with a characteristic belt buckle with six round disks and a Klingon disruptor on the left.

Female uniforms were made from the same fabric. Regular soldiers had black sleeves. Officers – like Kang's wife, Mara – had sleeves made out of the golden fabric.

From 2266 to 2267, all Klingons wore two golden buttons on the upper part of the black undershirt, just over the seam of the gold-colored vest. The only person seen not wearing these buttons was Kor, as he wore a sash. Kor, himself, wore a badge on his sash, maybe a House logo, and Kang wore the same sash and badge. Kor's lieutenant wore the two buttons, but also a different badge on his left shoulder.

During the first season of Star Trek: The Next Generation, Worf's baldric was almost identical to the sashes worn by Kor and Kang, except that Worf wore it over his right shoulder, to avoid covering his combadge.

By 2268, the buttons were replaced by rectangular colored pins, made out of a substance similar to mother-of-pearl. Every Klingon wore two of these pins, one on the left and another, of the same color, on the right. Some officers had golden pins, some had silver ones and some had purple ones. Kang wore two golden pins on the right side. The sash was draped over the other side. Kang's first officer had two blue pins on his right and two blue pins on his lefter side. Mara was the only Klingon seen with pins of different colors on one uniform. She wore a purple and a yellow pin on both shoulders.

By 2269, Klingon uniforms were also observed with more cool-colored, silver-lavender fabric, in place of the previously noted golden material, worn with a version of the familiar, studded, angular belt buckle that has been a staple of Klingon uniforms for over one hundred years.

Shortly afterwards, the Klingon Defense Force adopted a new uniform. The basic form consisted of a black tunic and black trousers, topped with metallic gray armor vests and large shoulder pads. Several variants on this uniform type were seen: some warriors did not wear the undershirt, and some officers wore sashes or stoles over the vests. Other warriors, like Vixis, wore a sleeveless vest version. When officers wore sashes, they generally went across their right shoulder, as opposed to their left. Klingon warriors of the time often wore special, pronged, fingerless gloves on their hands, to give them more of an advantage in hand-to-hand combat. Some very high-ranking Klingon officers (like Colonel Worf, Brigadier Kerla, General Chang, and Chang's subordinates who accompanied Chancellor Gorkon to the Khitomer Conference) wore a black, more leather-like version of this uniform, often accompanied by a sash.

These revised Klingon uniforms were introduced in Star Trek: The Motion Picture. As such, they are mentioned in notes that costume designer Robert Fletcher wrote, regarding the various aliens in that film. The note about the Klingons contains the statement, "Costume: mixed silver powder into fabric and liquid plastic for bright trim on armor. Used surgical tubing dyed black for other trim." (The Making of Star Trek: The Motion Picture, p. 133) 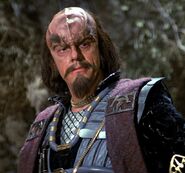 A male Klingon captain's uniform (with stole) in 2285

A female Klingon warrior's uniform in 2287

A male Klingon brigadier's uniform (with sash) in 2293

In 2259 of the alternate reality, all Klingon warriors wore helmets that were designed to resemble cranial ridges, and bore protruding nose and cheek guards. Some officers wore a long coat with a sash bearing the Klingon insignia, while others wore armor over a gloved jumpsuit, though it had an identical collar and lines resembling the sash with the Klingon emblem.

Costume designer Michael Kaplan designed the helmet and a similar long coat for a deleted scene from Star Trek, set on Rura Penthe. Kaplan described them as his favorite costumes for the film, explaining he modeled the helmets on a horseshoe crab, while the coats were intended to resemble the texture of an elephant or rhinoceros. (Star Trek - The Art of the Film, p. 42)

After 2290, the Klingon uniform combined elements from the 2260s and 2280s uniforms. Warriors wore a silver metallic uniform with large shoulder pads and the six-button belt buckle. Officers sometimes wore a special stole over their shoulders, showing medals from past achievements. The black, leather-like variant previously worn by higher-ranking Imperial officers was still worn as well, though rarely. The standard uniform was also worn by officials in the Klingon High Council, including the Chancellor, as well as by the personal guards of Klingon Great Houses, suggesting that its significance was not purely military.

By 2380, the Klingon uniform had been changed again. It bore some similarities to its previous design, albeit with a more streamlined appearance, two-toned gray shoulder armor, and the addition of maroon-colored elements. Additionally, certain high-ranking officers had armor that was trimmed with gold coloring. (LD: "Envoys", "Temporal Edict", "wej Duj")