Konami (pronounced ko-NAH-mee) is a leading developer and publisher of numerous popular and strong-selling toys, trading cards and computer/video games.

The company was founded in 1969 as a jukebox rental and repair business in Osaka, Japan by Kagemasa Kozuki, the firm's current chairman and CEO.

The name "Konami" is a conjunction of the names Kagemasa Kozuki, Yoshinobu Nakama, Hiro Matsuda, and Shokichi Ishihara, who were partners acquired in 1973 by Kozuki and the original founders of Konami Industry Co., Ltd.. In Japanese, the word "konami" also means "small waves".

In 1991, Konami became a licensee for producing Star Trek-related electronic and video games and it produced a number of games:

This "blind-box gashapon" line was an addition to the SF Movie Selection, a series within the Konami Figure Collection that has focused on producing miniatures from licensed entertainment properties, including the Alien films, Battlestar Galactica (TOS), Captain Scarlet and the Mysterons, Daimajin, Fireball XL5, Gamera, Godzilla, Joe 90, King Kong (1933), Mighty Jack, Space 1999, Stingray, Supercar, and UFO.

A second Star Trek volume for the series was being planned in late 2006 [1] but did not reach production.

Special "chase" ships, including one entirely new starship mold, were produced in smaller quantities and were randomly packed into cases along with the standard releases.

*The ship is identical to the standard release above but is packed with a "Special" stand featuring a Star Trek logo printed above the vessel's name. 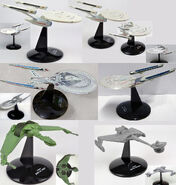 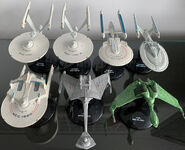 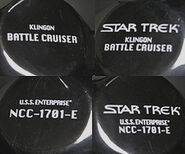 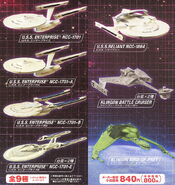