These Klingon marauders served under their commanding officer, Korok, aboard a D5 class Klingon starship in the 2140s and 2150s. For five seasons, they threatened the colonists of a deuterium mining colony and took the majority of the deuterium and leaving only the bare minimum so the colony could survive.

In 2152, a group of five beamed down to the colony to get their deuterium. When Tessic told them the amount was not ready, Korok struck him down. When Maklii tried to help, one of the marauders also struck him down. The Klingon landing party beamed back to their ship, leaving an ultimatum of four more days.

An away team of Enterprise NX-01 witnessed this situation and offered help to the colonists, training them in evasive techniques and using their weapons more effectively. When the Klingons returned after four days, they beamed down a team of six Klingons and Korok. When they realized that they were being attacked by the colonists, they tried to hunt them down and used their bat'leths and mek'leths but were caught in a trap in the deuterium field. Korok withdrew and his crew was beamed aboard their ship. (ENT: "Marauders") 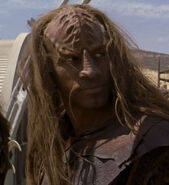 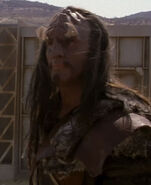 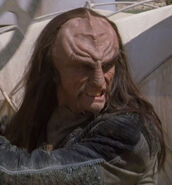 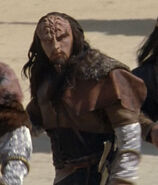 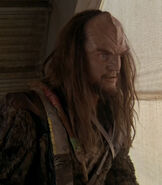 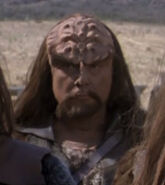 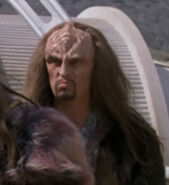 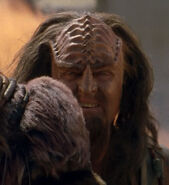 Played by an unknown stunt performer
Add an image to this gallery
Retrieved from "https://memory-alpha.fandom.com/wiki/Korok%27s_ship_personnel?oldid=2409299"
Community content is available under CC-BY-NC unless otherwise noted.