The following is a list of Klingons who served aboard the Kronos One in 2293.

This soldier served as General Chang's assistant during his time aboard Kronos One. He restored the anti-gravity at Chang's orders. (Star Trek VI: The Undiscovered Country)

This Klingon was played by stunt performer Don Ruffin.

This Klingon officer served as Chancellor Gorkon's personal soldier. He was present in Gorkon's stateroom when the anti-gravity failed after Kronos One was hit by photon torpedoes. When the two assassins entered the room he was killed by one of them who fired a phaser onto him. (Star Trek VI: The Undiscovered Country)

This Klingon soldier was portrayed by stunt performer Gary Pike.

These two Klingon soldiers were putting the dead transporter officer on a stretcher when Captain Kirk and Doctor McCoy materialized in the transporter room. At the orders of Brigadier Kerla they guided Kirk and McCoy through the corridors to the stateroom of Chancellor Gorkon where they grabbed their arms and held them while Chang explained what happened. When Doctor McCoy tried to save Gorkon's life they helped to put Gorkon on the table. Following the death of Gorkon they arrested Kirk and McCoy, put them in handcuffs and brought them into the ship's prison.

The second Klingon soldier was later present during Azetbur's speech at the Khitomer conference and protected her during the assassination attempt on the Federation president. (Star Trek VI: The Undiscovered Country)

Both Klingons were played by background performers who received no credit for their appearance.
Durrenberger listed his Klingon as "Klingon Warrior Gerion" on his resume. [1]
Koran also portrayed a Klingon helmsman in the same film. 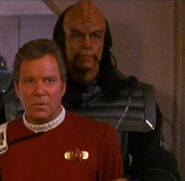 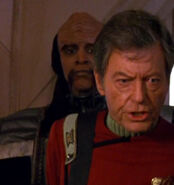 Played by Ampy Koran
Add an image to this gallery

The first two officers went through a corridor aboard Kronos One when the anti-gravity went off. Shortly thereafter the two assassins, later identified as USS Enterprise-A yeomen Burke and Samno, fired their phasers and shot them. One of them was later found dead in a corridor when Captain Kirk and Doctor Leonard McCoy went to Gorkon's stateroom.

The third Klingon was lying dead in a corridor when Captain Kirk and Doctor McCoy were brought to Chancellor Gorkon's stateroom.

The fourth Klingon was running through a corridor when a photon torpedo exploded in this section.

The other Klingons were running through the corridors and carrying away the dead and wounded while Captain Kirk and Doctor McCoy came aboard the Klingon ship. (Star Trek VI: The Undiscovered Country)

All Klingons were played by stunt performers and background actors who received no credit for their work.
One of them was played by Robert Bruce whose belt was sold off on the It's A Wrap! sale and auction on eBay. [2] 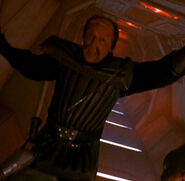 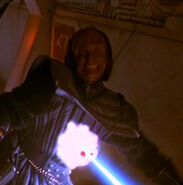 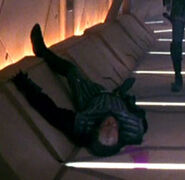 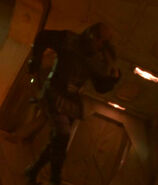 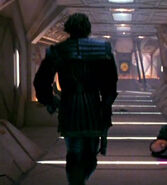 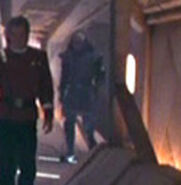 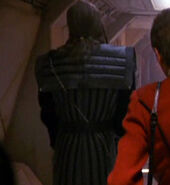 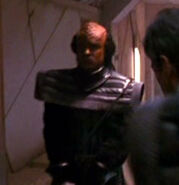 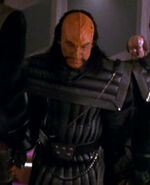 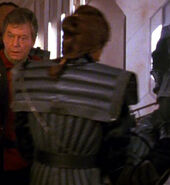 This Klingon officer served as transporter operator aboard Kronos One in 2293. He was drifting in the room after the anti-gravity system was damaged. He witnessed the two assassins beaming aboard and was shot by one of them. (Star Trek VI: The Undiscovered Country)

This Klingon was portrayed by stunt performer Scott Leva.
Retrieved from "https://memory-alpha.fandom.com/wiki/Kronos_One_personnel?oldid=2454871"
Community content is available under CC-BY-NC unless otherwise noted.