Ktaris
The Ktarians were a humanoid species native to the planet Ktaris. (VOY: "Child's Play") The were also known by the Borg designation of Species 6961. (VOY: "Dark Frontier")

Ktarians had technology sufficient for the creation of plasma coils as early as the 21st century. (TNG: "Birthright, Part I") However, during the 24th century, one type of Ktarian vessel was inferior to such Federation starships as the Galaxy-class. (TNG: "The Game")

The Ktarians had a delegate present at the Coalition of Planets talks on Earth in 2155. (ENT: "Demons")

At least one member of this species had been assimilated by the Borg by the 2350s; another was a member of Unimatrix Zero in 2377. (VOY: "Dark Frontier", "Unimatrix Zero")

In 2368, the Ktarians tried to gain control of Starfleet. They created a type of mind control technology disguised as the highly addictive "Ktarian game", and attempted to use it in order to influence Starfleet officers. The Ktarians almost succeeded in gaining control of the USS Enterprise-D but failed due to the efforts of Lieutenant Commander Data, Ensign Robin Lefler, and Wesley Crusher. (TNG: "The Game")

By the 2370s, the Ktarians were officially with the Federation, but sympathized with the Maquis. (VOY: "The Voyager Conspiracy")

It seems there may have been a great variety among the Ktarian species. Most Ktarians had distinctive foreheads divided into two hemispheres (which seem to have been bones), and distinctive yellow eyes with horizontally slit pupils. (TNG: "The Game") In other, rarer cases, they had small horn-like exo-cranial ridges and human-like eyes, or a particularly pronounced brow ridge. (VOY: "Fury", "Dark Frontier")

In the case of a Ktarian/Human hybrid, the resulting offspring appear to manifest more Ktarian traits than human ones. A rare complication of hybrid gestations, in the case the father was a Ktarian with exo-cranial ridges, occurred when the baby shifted position in the uterus and the exo-cranial ridges lodged in the uterine wall. A Ktarian/Human hybrid's gestation period was almost eighteen months. (VOY: "Deadlock", "Fury")

Upon birth, breast feeding could begin immediately; however Human females needed to remain cautious, as the incisors of Ktarian infants erupted within three to four weeks of birth. Because Human females lacked the scales of a Ktarian, alternative measures to protect the flesh were typically recommended. (VOY: "Deadlock") The early stages of Ktarian development were marked by significant growth – a much higher rate of growth than that of Human toddlers. At the age of two, Naomi Wildman, a Ktarian/Human hybrid, grew five centimeters in a three-week period. (VOY: "Mortal Coil")

Ktarian hearts had eight chambers. The sound they produced was similar to that of a pulsar cluster's EM fields vibrating against a ship's hull. (VOY: "Body and Soul")

Ktarians maintained burial sites on the planet Ktaria VII. The Ktarian burial ceremony consisted of, at least partly, placing thousands of stones around the tomb of the deceased; each of these stones was sacred and acted as a prayer. (VOY: "Emanations")

A Ktarian music festival was held in 2370, during which Harry Kim met his girlfriend Libby (by sitting in her seat). (VOY: "Non Sequitur", "Threshold")

The Ktarian glaciers were a popular ski destination. (VOY: "Macrocosm")

Several seemingly different species have been identified as Ktarians over the course of The Next Generation and Voyager, with the most notably obvious difference being found in the cranial features seen on Etana, Naomi and the Borg drone.

Etana was described in the script simply as an "alien, gorgeous, with a full, flowing mane of hair."

According to an internal reference document, listing all the aliens seen in Star Trek: The Next Generation, which was circulated around the time of the production of TNG Season 5, the Ktarians were described as "mostly humanoids, slightly enlarged front cranium formed into two circular halves, separated by a shallow crease in the skin."

Regarding design and make-up of the Ktarian, Etana, Michael Westmore shared in two different publications, the following information:

Ktarians – When Etana, a Ktarian, subverts Riker's mind, and the minds of most of the crew, with an insidious game device, the Enterprise finds itself in terrible danger. Part of Etana's ability to lure Riker depends on her dramatic beauty, a beauty that had to be represented visually despite Etana's alien physiology. Makeup was able to accomplish this by enhancing her female facial features. An appliance gave her a high, expanded forehead with bulbs for two large brain lobes. She wore a very beautiful red wig with full, rich hair. Her eyes were highlighted by powerful eyeliner and extra long and think eyelashes, finishing out with seductive full lips. This was the first time we did a creative painting on fingernails. She was a very effective character. (Star Trek: Aliens & Artifacts, p. 117)

When I was creating the makeup for Etana [...] I wanted her to look beautiful and alien at the same time; not always an easy thing.

Because the actress who played Etana had a very high forehead, I decided to create an appliance that would give her a large, bulbous forehead. We added a long red wig, like a lion's mane, to accentuate that look. I applied a total high fashion makeup, including eye makeup, false lashes, and full lips. The idea was that even thought we was from another planet, Riker would still find her seductively attractive.

I also decided to give her a set of long, glamorous fingernails, and spent a long time painting and airbrushing them in hot colors. Unfortunately, we decided to glue them on with a temporary nail glue , and they kept popping off. During her scene with Riker, she spent a lot of time grabbing and chasing him around, so we had to follow her around the set, retrieving the nails and gluing them back on. (Star Trek: The Next Generation Makeup FX Journal, p. 88) 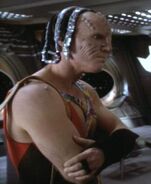 While Etana shared a likeness with the later seen Miradorn – both having double lobed foreheads and similar brow features – she lacked the exo-cranial thorn-like features found on Naomi Wildman – who in turn shared a likeness with Trajok, an unidentified alien. In both Voyager and Enterprise, two female individuals appeared who resembled the "original" Ktarian make-up seen on Etana. For more information on these discrepancies, see the full analysis at Ex Astris Scientia.

As established by the first draft script of ENT: "Anomaly (ENT)", the Osaarians were temporarily intended to be Ktarians instead.

According to the Star Trek: The Next Generation - Player's Guide, Ktarian history is marked by three periods of warfare: the God Wars, the Doctrine Wars and the National Wars. Each period of wars ended with the formation of a world government, but the first two of these eventually collapsed. Ktarians made contact with the Federation in the 2350s. After the Ktarian plot to take over the Federation was thwarted, the Federation threatened to change Ktaria VII's status from "nonaligned" to "hostile" putting Ktaria's economy, which was dependent on exporting goods to the Federation, at risk. The Ktarian government officials were arrested and charged with criminal offenses, and a new Federation-friendly government was elected. Ktaria eventually became a probationary Federation member. One third of the Ktarian population is devoutly religious, while another third are atheists.

The Star Trek Adventures - Beta Quadrant sourcebook reveals there are two species of Ktarians that both evolved on Ktaris, corresponding to the differing appearances of Etana Jol and Naomi Wildman. These two species sometimes intermarry, causing both species to carry the traits of the other.