LaFaye Baker is a stuntwoman, stunt actress, and stunt coordinator who performed stunts in episodes of Star Trek: The Next Generation, Star Trek: Deep Space Nine, and Star Trek: Voyager. She received no credit for this work.

In 2006 she was the director, writer, producer, and lead actress in the stunt documentary Hollywood at its Best. She has doubled for actresses such as Angela Bassett, Regina Hall, Whoopi Goldberg, Vanessa Williams, Alfre Woodard, Gina Ravarra, Stacey Dash, and Nia Long, has done many television commercials, and has appeared in several music videos for performers such as Janet Jackson, The Fugees, and TLC. 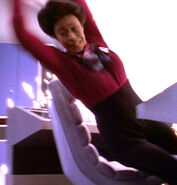 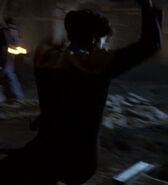 Retrieved from "https://memory-alpha.fandom.com/wiki/LaFaye_Baker?oldid=2514012"
Community content is available under CC-BY-NC unless otherwise noted.