One of his early work was a regular on the PBS series Square One, which also featured Reg E. Cathey.

In 2002, Cedar along with Googy Gress did voice work for a two-part episode of the cartoon The Zeta Project along with Diedrich Bader and Kurtwood Smith.

He also played a recurring role as Leon in Deadwood and made guest appearances on Frasier and Stargate SG-1 and has provided voices for the "Tony Hawk" video games. 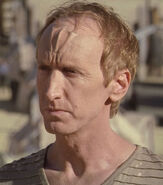 Tessic
ENT: "Marauders"
Add an image to this gallery

Retrieved from "https://memory-alpha.fandom.com/wiki/Larry_Cedar?oldid=2481465"
Community content is available under CC-BY-NC unless otherwise noted.