Laser weapons were weapons that utilized lasers, a directed light technology that compressed photon particles into a beam that could have heat and blast effects. While many spacefaring species used lasers in other applications, such as in optical data networks, few used them as weapons by the 23rd century, since a variety of exotic subatomic particles could be used to create a more powerful beam that duplicated lasers in use, but increased the weapon's effectiveness.

In 2268, Lieutenant Nyota Uhura wondered why the Klingons didn't provide the villagers of Neural with more advanced weaponry, such as old-style hand lasers. (TOS: "A Private Little War")

By the 24th century, only a few species still used ship-board laser weaponry, including:

In 2365, the Class 9 cargo vessel Erstwhile was armed with a 2.3 megawatt laser array with four emitters. (TNG: "The Outrageous Okona", production art) That same year, the Solari of Solais V were utilizing hand-held laser weapons capable of vaporizing a humanoid during their civil war. The vaporization effect appeared similar to that of a disruptor at maximum setting. (TNG: "Loud As A Whisper")

Starfleet Regulations called for a Federation starship to go to yellow alert when targeted by laser weapons from another vessel. In 2365, Captain Jean-Luc Picard thought that this rule was outdated, since the laser weapons of an Atlec vessel were incapable of even penetrating the navigational deflectors of the USS Enterprise-D. Picard also noted that the Atlecs could fire until their lasers ran dry, and they still wouldn't have caused any damage to the Enterprise. (TNG: "The Outrageous Okona")

In 2371, as a result of both radiation poisoning and close proximity to an artificial quantum singularity, Chief Miles O'Brien began experiencing jumps through time by approximately five hours. In one of these jumps, he saw himself being killed by what he later thought could have possibly been a high-energy laser. (DS9: "Visionary") 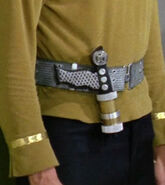 A Starfleet laser pistol, circa 2265

A Solari laser weapon (2365)
In The Making of Star Trek, Gene Roddenberry stated that two days into the filming of the second pilot, they realized that three years later people are going to say "Oh, come on, lasers can't do that," so the term was substituted with phaser.
Community content is available under CC-BY-NC unless otherwise noted.
Advertisement