Levardis Robert Martyn Burton, Jr. (born 16 February 1957; age 64) is the American actor who played Geordi La Forge on Star Trek: The Next Generation throughout the show's entire seven-year run, from 1987 to 1994. He also played La Forge in the four TNG-era Star Trek films, in the TNG video game A Final Unity, and in the Star Trek: Voyager episode "Timeless", which he directed. In addition, he directed two episodes for Next Generation as well as numerous episodes for Star Trek: Deep Space Nine, Star Trek: Voyager, and Star Trek: Enterprise. He holds the highest amount of directorial credits for the cast members, at 29 episodes directed.

Besides his affiliation with Star Trek, Burton is known for his star-making, Emmy Award-nominated performance as Kunta Kinte in the acclaimed 1977 mini-series Roots. He is also well known as the long-time host of the popular, Daytime Emmy Award-winning children's educational program Reading Rainbow.

Tim Russ, who was an initial candidate for the role of Geordi La Forge, described Burton as "a great actor." (Star Trek: Communicator issue 101, p. 54)

The child of a military family, Burton was born in Landstuhl, West Germany, as that is where his father – an Army NCO – was stationed at the time. At the age of 13, Burton entered a Catholic seminary to study for the priesthood but ultimately decided to pursue an acting career instead, graduating from the University of Southern California's (USC) School of Theater.

In 1990, he received a star on Hollywood's Walk of Fame for his work in the field of television.

Burton married Stephanie Cozart, the make-up artist of Reading Rainbow, in 1992. Their daughter, Michaela, was born in 1994. Burton also has a son from a previous relationship, born in 1980, whom Burton was given joint custody of following a paternity suit.

Burton and his family currently reside in Sherman Oaks, California. An avid poker player, Burton has participated in the World Poker Tour. [1]

Burton currently serves on the advisory committee of the 100 Year Starship Initiative, which seeks the launching of an interstellar voyage within the next one hundred years. Astronaut Dr. Mae Jemison is heading the initiative. [2]

Burton recorded a public service announcement for NASA to explain the purpose of the MAVEN mission to Mars, which was launched on November 18, 2013. [3]

Burton was an undergraduate in USC's drama department when he was discovered and chosen to play the key role of Kunta Kinte in Roots, which premiered in January 1977. This groundbreaking mini-series became one of the most acclaimed and highest-rated programs in US television history, earning a total of 37 Emmy Award nominations (winning 9); Burton himself earned an Emmy nomination for his performance.

Among Burton's co-stars in this series were Madge Sinclair and Ben Vereen, who went on to play the parents of Burton's Geordi La Forge in TNG: "Interface". Sinclair and Vereen also received Emmy nominations for their performances in Roots.

After Roots aired, Burton played the title role in the TV movie Billy: Portrait of a Street Kid. This movie aired in September 1977, only eight months after Roots introduced Burton to television audiences. One month later, Burton was seen in his first feature film, Looking for Mr. Goodbar, which also starred Richard Kiley.

The following year, Burton reunited with Madge Sinclair in the TV movie One in a Million: The Ron LeFlore Story, with Burton playing the title character – an ex-con who became a professional baseball player – and Sinclair playing his mother. Burton concluded the decade with the TV movie Dummy, in which he co-starred with Paul Sorvino and Gregg Henry. Burton and Sorvino worked together again on the TNG episode "Homeward" and the 1994 TV movie Parallel Lives, while Henry appeared with Burton in Star Trek: Insurrection.

Burton broke into episodic television in the 1980s, guest-starring on an episode of Trapper John, M.D. (again working with Madge Sinclair, who was a regular on the series, as well as Miguel Ferrer and Louise Sorel) and Fantasy Island (starring Ricardo Montalban, in an episode with Janet MacLachlan). In addition, Burton co-starred with TOS actress Nichelle Nichols in the 1986 science fiction thriller, The Supernaturals, and appeared in a 1987 episode of Murder, She Wrote with Michael McGrady.

In 1983, Burton began hosting Reading Rainbow, an educational program for the Public Broadcasting Service (PBS) aimed at encouraging children to read. As both host and executive producer of this series, Burton has earned a total of ten Daytime Emmy nominations, with six wins. He also earned seven Image Award nominations, winning four of them.

For seven seasons of this show, Burton worked concurrently on this series and Star Trek: The Next Generation. The 1988 episode The Bionic Bunny Show of Reading Rainbow actually showed a behind-the-scenes look at the making of TNG (specifically during the episode "Symbiosis").

Following the first presidential debate between President Barack Obama and former Massachusetts Republican governor Mitt Romney, Burton became enraged at Romney's campaign pledge to cut government funding for PBS. Burton targeted Romney, being quoted on TMZ as saying "I am personally outraged that any serious contender for the White House would target as part of his campaign the children of America in this fashion." Burton further added "Educators across the country, as well as millions of children and adults know that the programming on PBS has been responsible for significant improvements in education, literacy, math, science and life skills for generations of our children." Burton continued, "Defunding PBS directly punishes the less fortunate by removing this trusted and extraordinary educational resource available to all. On behalf of America's children, I can't stay silent. I encourage you to join me in fighting this short-sighted and frankly mean-spirited attack on our children." [6]

Star Trek and beyond

In 1987 Burton was cast as Geordi La Forge, a blind Starfleet officer who utilizes a VISOR to see. Initially, the character was the flight control officer of the USS Enterprise-D with the rank of lieutenant junior grade. By the second season, however, La Forge was the ship's chief engineer, holding the rank of lieutenant and later lieutenant commander. Burton starred on the show throughout all seven seasons, appearing in all but four of the 177 episodes.

Burton was later a member of the music band known as The Sunspots, along with his TNG castmates Jonathan Frakes, Michael Dorn, and Patrick Stewart. They appeared as the background vocals for "It's a Sin to Tell a Lie" on Brent Spiner's 1991 album Ol' Yellow Eyes is Back. He can also be heard on The Orb's track "Little Fluffy Clouds", which sampled an episode of Reading Rainbow, apparently without Burton's permission.

Since he was working on both TNG and Reading Rainbow at the same time, Burton did little else during the early 1990s. He did supply the voice of Planeteer Kwame as well as the opening narration on the hit animated series Captain Planet and the Planeteers from 1990 through 1993; his TNG co-star Whoopi Goldberg also voiced on this series. In addition, he did voice work for an episode of Batman: The Animated Series entitled "The Worry Men" and played a fire chief in the 1993 TV movie Firestorm: 72 Hours in Oakland, co-starring Keone Young.

In 1998 Levar appeared as Lt. Commander Geordi La Forge in Star Trek: The Experience at the Las Vegas Hilton.

In 2001, LeVar, along with several other Star Trek cast members including William Shatner, Wil Wheaton, Denise Crosby, and John de Lancie, competed for charity on the NBC quiz show, The Weakest Link. LeVar defeated Voyager actor Robert Picardo in the final round to win an impressive US$167,500 for his charity, Junior Achievement of Southern California. It was a record for the show.

Several costumes and costume components worn by Burton throughout his performance as Geordi La Forge in Star Trek were sold off on the It's A Wrap! sale and auction on eBay. [9]

In 2016, Burton appeared at E3 to promote the virtual reality game Star Trek: Bridge Crew. He also recorded a video with Jeri Ryan and Karl Urban of them playtesting the game.

In addition to acting, Burton has directed many Star Trek episodes. In fact, he has directed the most episodes of any Star Trek actor and is one of only five directors to shoot at least one episode of every live-action Star Trek spin-off series from The Next Generation through Enterprise, the others being James L. Conway, Winrich Kolbe, Mike Vejar, and David Livingston.

It was during his time on TNG that Burton became interested in directing. He made his directorial debut with the sixth season episode "Second Chances". He then directed the "The Pegasus", an episode of the seventh and final season. After TNG ended, Burton moved on to direct ten episodes of Deep Space Nine, eight episodes of Voyager, and nine episodes of Enterprise.

In 1998, he directed his first non-Trek project, The Tiger Woods Story. His other television directorial credits include multiple episodes of Soul Food and Charmed. He also directed the 2003 family film Blizzard, starring Christopher Plummer and featuring the voice of Whoopi Goldberg as the title reindeer. Burton himself made a cameo appearance in the movie as an elf.

He recently directed and starred in the comic drama Reach for Me, working with performers Adrienne Barbeau, Seymour Cassel, and Alfre Woodard, and cameraman Kris Krosskove. Another directing project – a film called Initiation – is also in the works.

After TNG, Burton had a recurring role on the CBS series Christy and made a guest appearance on Brent Spiner's new, short-lived series, Deadly Games (co-starring Christopher Lloyd). In 1996, Burton co-starred with Richard Herd and Malcolm McDowell in the Showtime Network's sci-fi thriller Yesterday's Son.

In 2000, Burton guest-starred on Becker (starring DS9's Terry Farrell, in an episode with Andy Milder). The following year, he made a brief appearance as Martin Luther King, Jr., in the 2001 biographical film Ali, which also featured the aforementioned Albert Hall and Bruce McGill.

Burton's latest appearance as Geordi La Forge was in the 2002 film Star Trek Nemesis. Burton was not pleased with this supposedly final chapter in the TNG saga, remarking at DragonCon 2005 that the reason it failed at the box office was "because it sucked". Burton also held contempt for Nemesis director Stuart Baird, who, according to Burton and his castmates, continually called Burton "Laverne" and erroneously referred to his character as an "alien". [10] However, Burton has recently softened his view on Nemesis and decided to give it another chance, acknowledging that some people actually like it. [11]

In 2003, Burton had a guest spot on Boomtown (starring Neal McDonough, in an episode with Vanessa Williams). In 2005, he had a voice-over role in the "Petarded" episode of Seth MacFarlane's Family Guy. Burton later returned to Family Guy, when he and his TNG castmates voiced themselves for the 2009 episode "Not All Dogs Go to Heaven". In the episode, Stewie Griffin (voiced by creator Seth McFarlane) kidnaps the cast of TNG and proceeds to spend the day with them, much to his own regret.

In 2009, Burton starred in the Lifetime TV movie Taken in Broad Daylight. He then appeared in the 2009 independent film Reach for Me, which he also directed and produced. More recently, Burton voiced the DC Comics superhero Black Lightning in the upcoming direct-to-DVD animated movie Superman/Batman: Public Enemies, with Clancy Brown voicing Lex Luthor.

In 2011, Burton guest starred as himself in episode 16 of season two on NBC's sitcom Community.

Burton starred as Paul Haley on the TNT drama series Perception, created by Kenneth Biller and Mike Sussman, from 2012 to 2015. Burton worked with Jonathan Scarfe, son of Alan Scarfe and step-son of Barbara March. The following year, he served as executive producer on a remake of Roots.

(all episodes except "A Matter Of Honor", "Manhunt", "Captain's Holiday", "First Contact", "Rightful Heir", and "Attached") 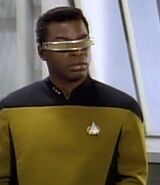 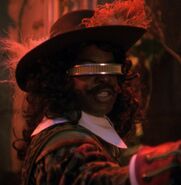 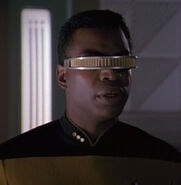 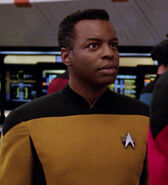 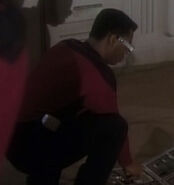 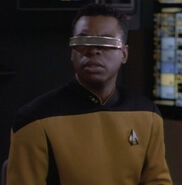 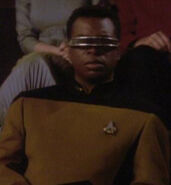 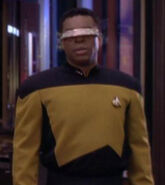