Leatrim Stang is a comedian, musician, and actor who worked as a recurring background Romulan officer in three episodes and as Bajoran in one episode of Star Trek: The Next Generation. He received no credit for his appearances, because he had non speaking roles. His Romulan characters were later featured in three Star Trek board games, trivia cards, and numerous publicity photos. Stang is also known under the artistic name Shannon Ratigan. The call sheets for the episode "The Mind's Eye" features him as Ratigan. He filmed his scenes for "The Mind's Eye" on Friday 22 March 1991 and on Thursday 28 March 1991 on Paramount Stage 8 and 16. The call sheet for the episode "Ensign Ro" also features him as Ratigan and he filmed his scenes for this episode on Monday 5 August 1991 on location at Bronson Canyon.

Stang described on his official blog some experiences of his Star Trek adventure. He has always been fascinated by science, and is a Trek fan from early years on and always dreamed about being on the Enterprise bridge. Then one day it just "materialized". The pay-rate for one day of work was about $600.00 and he would usually work for three days on one episode. He had three hours in make-up for his Romulan appearance and started his day on set at 4 am, usually until 8 or 9pm. His costume was a one piece costume with a back zip. Michael Westmore told him once that his make-up and time to bring it up was about $5000.00 worth.[1]

In 2011 he published the book "An Actor's Face, Audition, Casting Advice, And Anecdotes From A Working Actor" with chapter 25 "Working on Star Trek". [2] [3] 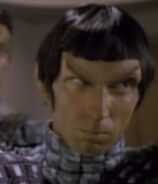 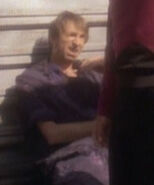 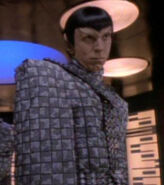 Retrieved from "https://memory-alpha.fandom.com/wiki/Leatrim_Stang?oldid=2525838"
Community content is available under CC-BY-NC unless otherwise noted.