Park had her first stage appearance when she was a child as Princess Rhyme in the show The Phantom Tollbooth in the community theater. By her high school years, she was already a professional actress, with her first paid performance being in Tom Stoppard's play Arcadia. She studied for four years at Boston University, where she earned her Bachelor of Fine Arts and continued her involvement in the theater.

After graduation, she spent some time in New York, and later went to Hollywood. There she applied for roles in Rush Hour 2 and Jurassic Park III (both released in 2001), ultimately winning a supporting role in the latter film – the first time she set foot on a big Hollywood set. Frequent Star Trek guest actor Bruce French also made an appearance in the film.

Park subsequently made a guest appearance on the television series Popular at the same time her future Enterprise castmate Anthony Montgomery was working on the show, and the two appeared in the same episode. Shortly thereafter, Park received a phone call inviting her to read for the part of Hoshi Sato on Enterprise.

At the first reading for the role of Hoshi Sato, Park faced many Asian actresses who also wanted the role, but she was called back to read again. The producers then decided to hold a screen test and eventually gave her the part. She went on to play the role throughout all four seasons, from 2001 until its cancellation in 2005.

In 2004, while Enterprise was still in production, Park took time off from playing Sato to co-star with Next Generation actress Marina Sirtis and Enterprise guest actor Tucker Smallwood in the science fiction thriller Spectres. She went on to co-star with Sirtis in the Enterprise series finale "These Are the Voyages...", in which Sirtis played her familiar role of Deanna Troi.

Park's other credits include the little-known films Geldersma (2004) and Honor (2005). She also made a brief appearance in the 2002 made-for-TV movie Taken (not to be confused with the mini-series of the same name) and, in 2003, she produced and starred in the short film My Prince, My Angel.

Park has remained active in theater since the cancellation of Enterprise. She recently earned high praise for her performance as Clytemnestra in a production of the play Agamemnon, which ran in New York City in October and November of 2005. She also remains an active student of dance, studying ballet and other dance forms.

She recently starred as police officer Sally Lance on the short-lived NBC series Raines. The series premiered mid-season, March 2007, and concluded the following month. She most recently starred in the ABC police drama Women's Murder Club. Although this series premiered 12 October 2007, Park did not make her first appearance on the show until the next episode, airing 19 October. The series concluded its first and only season on 13 May 2008, with an episode guest-starring Park's former Enterprise co-star John Billingsley.

Park has a role in the 2009 horror/comedy film Infestation, along with Ray Wise. She also guest-starred in the 25 March 2009 episode of NBC's Life, which was followed by a brief appearance in the 19 May 2009 episode of NBC's Law & Order: Special Victims Unit (along with Alan Dale). Park recently starred as Maggie Cheon in the second season of the Starz! Network series Crash, based on the acclaimed 2004 film which featured the aforementioned Marina Sirtis. She also had a role in Castle as Chief Inspector Zhang in the episode "Hong Kong Hustle".

Park recurred in 2021 as news anchor Amy Chang in the second season of Ronald D. Moore's alternate history series For All Mankind.

At one time, Park was dating actor Tom Hardy, who played Shinzon in Star Trek Nemesis. They lived together in South London, England, and were even going to form their own theater company. She also starred with Hardy in a two-day London production of Brett C. Leonard's play, Roger & Vanessa, which Park co-produced. [1](X) [2] However, Park and Hardy broke off their relationship soon after, and she is now residing in Los Angeles, California. 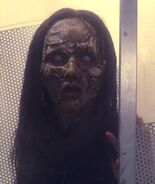 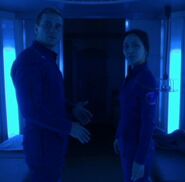 Organian (in the body of Hoshi Sato)
(ENT: "Observer Effect") 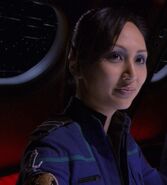 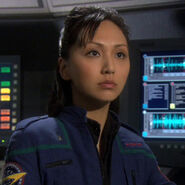