Lisa Madigan is an actress who was featured in episodes of Star Trek: Deep Space Nine and Star Trek: Voyager.

In 2002, she worked as actress, co-producer, and caterer on the short comedy The Boy Scout with Yoshio Iizuka. In 2008, Madigan was featured in an episode of the talk show Meet the Press. 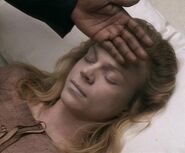 Holographic patron
VOY: "The Killing Game"
(uncredited)
Add an image to this gallery

Retrieved from "https://memory-alpha.fandom.com/wiki/Lisa_Madigan?oldid=2419803"
Community content is available under CC-BY-NC unless otherwise noted.