Lisa Vanasco is an actress who appeared in several episodes of Star Trek: Voyager as a background actress. She received no credit for her appearances. Her costume from the seventh season episode "Endgame" was sold off on the It's A Wrap! sale and auction on eBay, where her name was misspelled as Lisa Varasco on the name tag. [1]

Vanasco later appeared as a topless ticket taker in Joel Schumacher's thriller 8MM (1999, with Fran Bennett and Bob Clendenin) and as a time traveler in the short drama Dionysus Lost (2000). 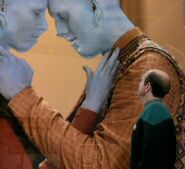 Courting Bolian
VOY: "Someone to Watch Over Me" 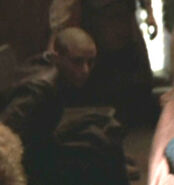 Retrieved from "https://memory-alpha.fandom.com/wiki/Lisa_Vanasco?oldid=2379759"
Community content is available under CC-BY-NC unless otherwise noted.