This guard was guarding a power plant that a group of protesters demonstrated at because they were against the use of polaric ion energy. When the demonstration turned confrontational, he fired a weapon into the air to disperse the group. (VOY: "Time and Again")

This guard was portrayed by Jerry Spicer.

This guard was at a power plant that a group of protesters assembled at to protest against the use of polaric ion energy.

As the protest became violent, he hit Captain Janeway in the head while trying to break up the protesters. Tom Paris punched the guard as the protest leader helped Janeway up and led her out of the area. (VOY: "Time and Again")

This guard was portrayed by stunt coordinator Dennis Madalone who received no credit for this appearance.

Latika's father worked for the Media Bureau on Makull's homeworld. In 2371, Latika threatened to tell his father about Tom Paris. (VOY: "Time and Again")

Makull's associate worked with Pe'Nar Makull during his attempts to end the use of polaric energy as a power source on the planet.

In an alternate timeline, the associate joined Makull in his protest attempt at a power plant when Kathryn Janeway got struck by a guard. He later joined Makull, along with the hostage Janeway, Tom Paris and Latika as they broke into the power plant to perform an unknown task. (VOY: "Time and Again")

He was played by background actor Paul Ganus who received no credit for this appearance.

This officer was a person on a Class M planet in the Delta Quadrant visited by the USS Voyager in 2371.

In an alternate timeline, the officer comforted Latika when he saw Kathryn Janeway and Tom Paris appear 'out of thin air', stating that the boy has been reading too many Darkstorm tales. He told Latika to have a confection bar, for which the child left. Later, after questioning Janeway and Paris regarding their questionable clothing, he helped the Starfleet officers blend into the local culture by pointing out a nearby clothing shop. (VOY: "Time and Again")

This officer was portrayed by Steve Vaught.

The shopkeeper owned a shop that sold timepieces that Paris noticed. The shopkeeper noticed him and tried to make a sale. When Paris told him that he was from Kalto Province and was not familiar with the time piece, the shopkeeper said that the time piece was the same as in Kalto. The shopkeeper explained about the time-piece, noting that that the three number sets were equal to rotations, intervals, and fractions. He asked for fourteen kelodas, but Paris said he would think about it. Upon returning to Janeway, Paris estimated that the planet would be destroyed the next day. (VOY: "Time and Again")

The shopkeeper was portrayed by Ryan MacDonald.

These individuals walked down the city streets when Captain Janeway and Tom Paris appeared right in front of a shop. They witnessed how Latika accused them of being demons. (VOY: "Time and Again")

The background performers are listed as "Townspeople" on the call sheet and filmed their scenes on Wednesday 9 November 1994 on Paramount Stage 16. 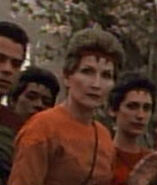 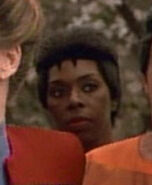 Played by Ken Gruz
Add an image to this gallery
Retrieved from "https://memory-alpha.fandom.com/wiki/List_of_Makull%27s_species?oldid=2352691"
Community content is available under CC-BY-NC unless otherwise noted.
FandomShop Fandom IG GalaxyQuest