The following is a list of individuals from Tau's species.

These three guards were employed by Tau in 2374. They guarded the city Tau made his business transactions in and were carrying weapons. Later, they also guarded the storage facility where Tau had his pirated equipment in storage.

When Kathryn Janeway and the holographic recreation of Leonardo da Vinci broke into this facility to retrieve the computer processor of the USS Voyager, one of the guards shot at da Vinci but was kocked out by Janeway.

Another guard accompanied Tau to a hillside to capture Janeway and da Vinci but the two escaped by using da Vinci's glider. (VOY: "Concerning Flight")

Though Tuvok mentioned about thirty armed guards closing to Janeway and da Vinci, only three of them were seen in the episode.
The call sheets are listing them as "Alien Guards" and "Armed Guards".
The costumes of Ty Murphy, Andrew Alden, and Bobby Aldridge were later sold off on the It's A Wrap! sale and auction on eBay.
[1] [2] [3] 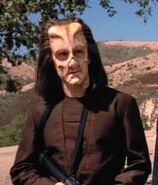 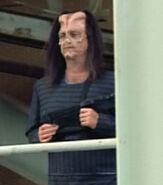 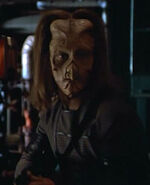 Played by Bobby Aldridge
Add an image to this gallery
Retrieved from "https://memory-alpha.fandom.com/wiki/List_of_Tau%27s_species?oldid=2318981"
Community content is available under CC-BY-NC unless otherwise noted.