Loot Crate, Inc. is an American subscription box marketing and distribution company that is based in Pasadena, California. Founded in May 2012 by Matthew Arevalo and Chris Davis, it markets its entertainment products to thirty-five countries worldwide. [1]

The company has released a number of Star Trek novelty items within a number of its monthly crates. Many of these items were later included in the Bonus Crate detailed below.

In September 2017, the company announced that it was introducing a licensed bi-monthly Star Trek-themed subscription box product line, in partnership with Quantum Mechanix (QMx). Some QMx items are also retailed by QMx's online webshop and are sold by other retailers.

Six crates were planned and a metal desktop replica of a starship was slated to be sent as a gift premium to customers who have subscribed to the entire series. [2]

Production delays plagued the line and all crates arrived months behind schedule.

In a January 2019 message to subscribers, the company apologized for the delay of the fourth crate and announced that the line would be discontinued after "all outstanding" crates are shipped to customers during the first half of the year. The release status of the gift premium (metal USS Enterprise) was to be be updated at a later time. [3]

Following the layoff of its warehouse staff in July 2019, the company and its subsidiaries filed for voluntary Chapter 11 bankruptcy protection on 11 August 2019, while it attempted to sell the company to Loot Crate Acquisition LLC, an affiliate of Money Chest LLC that is majority-owned by NECA. [4]

Following its successful acquisition in late 2019 as planned, emails were again sent, asserting that the remaining three crates of the series would be shipping to subscribers soon.

A fourth and fifth Mission Crate began to reach customers in December 2019, and the sixth arrived during the following month. The last three crates did not contain any QMx products.

Due to unforeseen production issues, the first crate was delayed and a small "Bonus Crate" (containing previously-released Loot Crate Star Trek novelty items) was sent to subscribers as a gift.

Bonus Crate contents
Add an image to this gallery

The cardboard crate has the Galileo shuttlecraft's outer hull markings and interior printed on it. 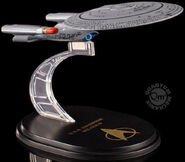 Mission 001 contents
Add an image to this gallery

Mission 002 contents
Add an image to this gallery 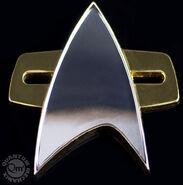 Mission 003 contents
Add an image to this gallery 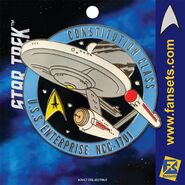 Mission 004 contents
Add an image to this gallery

Mission 005 contents
Add an image to this gallery

Metalworks USS Enterprise refit
Add an image to this gallery

Retrieved from "https://memory-alpha.fandom.com/wiki/Loot_Crate?oldid=2447301"
Community content is available under CC-BY-NC unless otherwise noted.