His professional resume also includes fight choreography and technical adviser on many films. Simon recently completed 2nd unit directing/Stunt Coordinating on the film 'Fly Away' in 2010. His second Unit directing credits include Havoc, Left In Darkness, The Good Mother, Who's Your Monkey and Sassy Pants (2011).

He also performed stunts in television series such as Charmed, Nikki, All My Children, Without a Trace, and the ABC series Castle.

Simon has produced music songs such as "Just like me" featuring DMC and Sarah MacLachlan and directed, wrote and produced a commercial titled "Everybody Has A Dream" for Rosemary Children's Services, a non-profit organization benefiting needy children. The commercial can be viewed on YouTube. 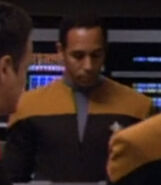 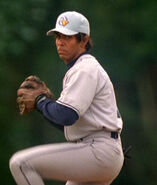 Vulcan baseball player
DS9: "Take Me Out to the Holosuite"
(uncredited)
Add an image to this gallery

Retrieved from "https://memory-alpha.fandom.com/wiki/Lou_Simon?oldid=2700413"
Community content is available under CC-BY-NC unless otherwise noted.