Throne was Gene Roddenberry's first choice for the role of Doctor Phillip Boyce for the first Star Trek pilot, "The Cage", however he turned down the role not wanting to play "the third man" next to the hero and his sidekick. However, Throne expressed interest in playing Spock, but Leonard Nimoy was already contracted to play the part by then. Roddenberry finally offered him the chance to provide the voice for the Talosian Keeper (physically portrayed by Meg Wyllie), which Throne accepted. Almost two years later, Throne was cast as Commodore Mendez for the "envelope" portions of "The Menagerie" two-parter. His voice for The Keeper had to be electronically pitch-altered so the audience wouldn't recognize it as the same actor who played Mendez. (These Are the Voyages: TOS Season Two)

Along with Gene Lesser he submitted a story idea for Star Trek called "The V.I.P.s". It did not go beyond a few bits of correspondence back and forth. [1]

He was with Leonard Nimoy for both his first (the first Star Trek pilot, "The Cage") and last (the TNG episode "Unification II") Star Trek appearances on television. He also appeared in two other productions with Leonard Nimoy: Mission: Impossible (1967, 1969, also with Lee Meriwether, Vic Perrin, Ed McCready, and Paul Sorensen) and the TV movie Assault on the Wayne (1971, also with Lloyd Haynes and William Windom).

As a boy, he had success in a musical version of Tom Sawyer, and he would go on to train as an actor at Brooklyn College and Long Island University. In 1959, he left the stages of New York to try to make a career in film and television.

Throne was a popular casting choice by producer Irwin Allen, and appeared in all of Allen's television shows: three episodes of Voyage to the Bottom of the Sea (1965-1967, with Joseph Ruskin, Robert Sampson and Ron Stein), an episode of Lost in Space (1966, with Bill Mumy and Ted Cassidy), two episodes of The Time Tunnel (1966-1967, with James Darren, Whit Bissell, Lee Meriwether, John Crawford, Peter Brocco and Perry Lopez), and an episode of Land of the Giants (1970, with Don Marshall, Joseph Ruskin, and Whit Bissell).

His other television credits include: The Outer Limits (1964, with William Shatner, James B. Sikking, Lou Elias, and Lawrence Montaigne), the role of "Joseph Ronaugh" on The Bionic Woman (1975, with Alan Oppenheimer and Paul Carr), the role of "Ali Baba" on The Krofft Supershow (1976-1978, with Jay Robinson and Frank Welker), and Project U.F.O. (1978, with Pamelyn Ferdin, Richard Derr, and Whit Bissell).

In 1995, Thorne portrayed the role of Centauri Prime Minister Malachi on Babylon 5's Hugo Award-winning episode "The Coming of Shadows" (Andreas Katsulas also co-starred in this episode). His character's assassination allows a war-mongering faction gain control of his planet's government. The ensuing war's consequences fuel the show's narrative arc for the remaining seasons.

He also appeared in the TV movies The Doomsday Flight (1966, with Celia Lovsky, Bert Remsen, and Michael Sarrazin), Code Name: Heraclitus (1967, with Ricardo Montalban and Chuck Courtney), Assault on the Wayne (1971, with Leonard Nimoy, William Windom and John Winston), It's a Bird, It's a Plane, It's Superman (1975, with Kenneth Mars), and Longarm (1988, with Daphne Ashbrook, Noble Willingham, and Rene Auberjonois). His film credits include the Muhammed Ali biopic The Greatest (1977, with David Huddleston, David Clennon, Lloyd Haynes, Skip Homeier, and Paul Winfield). In 1992, Throne portrayed William Campbell, Sr. on Melrose Place; his wife was played by Salome Jens. 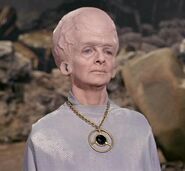 Voice of The Keeper
TOS: "The Cage", "The Menagerie, Part II"

Commodore José I. Mendez
TOS: "The Menagerie, Part I" 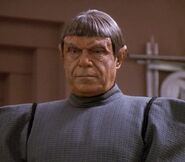