Mantilles was the inhabited second planet in the Pallas 14 system of the Alpha Quadrant. The planet was affiliated with the United Federation of Planets.

Prior to stardate 5371, a Federation colony was established on this planet. It was the most remote inhabited planet in the Federation, lying at the outer fringe of the galaxy. Mantilles was home to 82 million people, and was governed by retired Starfleet commodore Bob Wesley.

In 2269, the position and orbital path of Mantilles was illustrated on a system map displayed on the main viewscreen of the USS Enterprise bridge.

Mantilles came under threat by an unknown cosmic cloud creature. Governor Wesley's attitude prevented planet-wide panic, and five thousand children were successfully evacuated before the cloud reached the planet. The crew of the Enterprise managed to stop the creature before it consumed Mantilles. (TAS: "One of Our Planets Is Missing")

In 2293, the location of Mantilles in the Milky Way Galaxy was labeled in a star chart that was in Captain James T. Kirk's quarters aboard the USS Enterprise-A. (Star Trek VI: The Undiscovered Country, production art) 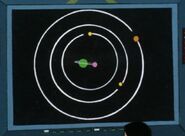 This planet's quadrant of origin is inferred based on the position of its star system as seen in the star chart appearing in Star Trek VI: The Undiscovered Country.

According to Star Trek: Star Charts ("United Federation of Planets I"), Mantilles was listed as a member planet of the Federation in 2378.

According to Star Trek Maps, Mantilles became the 25th Federation member in 2248.

According to the Pocket TOS novel Allegiance in Exile Wesley's assignment there was due to fears of Tholian espionage.

The FASA Federation Ship Recognition Manual named a ship after this world, the USS Mantilles (β).