The Maquis raider was a type of raider that was frequently utilized by the Maquis in their fight against the Cardassians during the early 2370s. Their small, maneuverable design made them ideal for operating in the Badlands. (DS9: "For the Uniform")

In 2371, Chakotay's Maquis cell operated the raider Val Jean, when they were pursued by the Cardassian Galor-class warship Vetar under the command of Gul Evek. The raider was an old craft; still using its rebuilt engine, it was no match for the much larger vessel and took refuge in the Badlands. While there, it was scanned by a tetryon beam and catapulted to the Delta Quadrant by an entity known as the Caretaker. The ship was later destroyed when, in order to protect the likewise marooned USS Voyager, it rammed and crippled a Kazon vessel operated by the Kazon-Ogla. The Maquis were transported aboard Voyager and forced to join the Starfleet crew for the trip home. (VOY: "Caretaker")

In 2372, Kasidy Yates' freighter, the SS Xhosa, rendezvoused with a Maquis raider inside the Badlands. (DS9: "For the Cause") And in 2373, several ships of this type participated in Maquis offensives against the USS Malinche, the USS Defiant, and Quatal Prime. (DS9: "For the Uniform")

Some of these raiders operated with impulse engines originally built around 2332. (VOY: "Caretaker") Their maximum warp was around warp 9, or comparable to that of a Defiant-class starship. (DS9: "For the Uniform")

The ship's maximum warp was based on the fact that both Eddington's raider and the Defiant departed the same planet on course for the same destination within minutes of each other; however, it was stated that it would take the Defiant twenty-two minutes to catch Eddington, indicating whatever advantage in speed the Defiant had, it was minimal. Later Eddington told Sisko that, with regards of his ship, he couldn't outrun the Defiant, suggesting otherwise.

These vessels were armed with wing-mounted phaser banks and the torpedo system consisted of four launchers, capable of firing either photon or stratospheric torpedoes. They were tactically inferior to larger Defiant or Galor-class warships.

In one engagement against the Vetar, it was favorable to reroute weapon power to the Val Jean's impulse generators to increase escape speed, with B'Elanna Torres addressing the situation by stating that "We're not making a dent in their shields anyway!" (VOY: "Caretaker")

In another engagement, Kira Nerys considered a Maquis raider to be "no match for the Defiant," a fact later also admitted by Eddington, who stated, "I can't outrun or outfight the Defiant", despite managing to elude it for quite some time. (DS9: "For the Uniform")

This type of ship had a cockpit which held four console stations, was not unlike that of a runabout in basic design.

The pilot sat in the forward port position, and the starboard forward position was the engineering station.

This type of vessel could also be equipped with holo-communicators. (DS9: "For the Uniform")

Pilot's position and starboard station aboard the cockpit

Port aft section of the cockpit 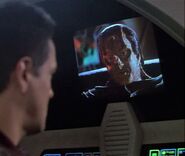 Eddington transmits from his cockpit
The cockpit of the Val Jean was a re-dress of the Danube-class runabout set from Star Trek: Deep Space Nine, with older-style display graphics first used in Star Trek V: The Final Frontier.

This class also had transporters; with a transporter pad adjacent to, or easily accessible from, the bridge. (DS9: "For the Uniform"; VOY: "Caretaker")

The name "Maquis raider" was mentioned in dialogue in the Deep Space Nine episodes "For the Cause" and "For the Uniform". It was also displayed on the computer graphic Teero Anaydis was looking at in Voyager episode "Repression". According to Star Trek: The Magazine Volume 2, Issue 4 (p. 112), a poster created for the set in "Repression" used the name "Ju'day-class", for Star Trek archivist Penny Juday.

According to the visual effects supervisor for the Voyager premiere "Caretaker", David Stipes explained that "the Maquis ship is one-fifth the size of Voyager, and that (model) is nearly two feet long. So I needed to be in North Hollywood to shoot it!" (Star Trek: Communicator issue 105, p. 59) Stipes succeeded in his goal, as was demonstrated in the shot where the Val Jean pulls up alongside the USS Voyager towards the Caretaker's array. Given that ship's accepted length of 343 meters, and the visual and technical reference to their difference in sized, the size of the raider translates into about sixty-eight meters.

For further information on the studio model that served as both the fighter and the raider, please see: Maquis raider model.

Although they shared the same basic design, the raider was somewhat larger than the Maquis fighter, with an altered cockpit and different detailing, since the interior set was represented by a redress of Danube-class runabout cockpit rather than a redress of the Nenebek shuttle interior.

The Maquis raider was also used as the secondary hull of the Starfleet Yeager-type starship. That ship type also consisted of parts from the Intrepid-class, making the raider-segment of the ship much larger in scale than the ships used by the Maquis. [1](X)

According to Issue #28 of Star Trek: The Official Starships Collection, the Ju'day-class raider was approximately 68.5 meters in length (twice the size of its fighter progenitor), had a maximum speed of warp factor 9, and a crew complement of 30.

The Star Trek Customizable Card Game named this ship type as the "Condor-class". It also gave the name Guingouin (β) to one of the Maquis raiders visible in the episode "For the Uniform".