Several costumes worn by Alaimo in Star Trek were sold off on the It's A Wrap! sale and auction on eBay, including his Breen suit from the episode "Indiscretion", which was later worn by background performer Todd Slayton. [1]

Born in Milwaukee, Wisconsin, Alaimo started his acting career with the Marquette University Players and the Milwaukee Repertory Theater in the 1960s. Making his homebase New York City, he performed with various theatre companies in New York and with touring companies across the country. While in New York in 1971, he acquired his first television role, playing the recurring character of Frank Barton during the 1971-1972 season of the soap opera The Doctors. He followed that up with a recurring role on another soap, Somerset, from 1972-1973. Alaimo is not the only Star Trek veteran to perform on the soap opera Somerset. Others include Bibi Besch, Nicholas Coster, Bruce Gray, DS9 co-star Barry Jenner, Mark Lenard, Michael Nouri, Percy Rodriguez, and Tucker Smallwood. However, all had either left or were not yet members of the cast during Alaimo's brief tenure.

His work on Somerset was followed with guest appearances on many TV shows, usually playing the villain. Some of the shows on which he appeared include Kojak (in an episode with Yvonne Craig), The Rockford Files, Gunsmoke (with George Murdock and series regular Charles Seel), Barnaby Jones (with series regular Lee Meriwether), Baretta, Starsky & Hutch (several episodes, including one with James B. Sikking and all starring David Soul), The Hardy Boys/Nancy Drew Mysteries (with Phillip Richard Allen, Michael Pataki, and William Schallert), CHiPs (two episodes – one with Ellen Geer and another with DS9 co-stars Michael Dorn and Barry Jenner; both also featured Robert Pine), The Incredible Hulk (several episodes, including one with Charles Napier), Wonder Woman, Charlie's Angels, Quincy M.E. (with Robert Ito and Garry Walberg), Knight Rider, The Fall Guy (two episodes, including one with Marshall R. Teague and Ian Wolfe), T.J. Hooker (two episodes – one with Lloyd Haynes, Robert O'Reilly, and series regular Richard Herd, and both starring William Shatner and James Darren), Hardcastle and McCormick (starring Brian Keith and Daniel Hugh Kelly in the title roles), Hunter (with series regular Bruce Davison), The A-Team (starring Dwight Schultz), Quantum Leap (starring Scott Bakula and Dean Stockwell, in an episode with Ron Taylor), and Walker, Texas Ranger (with Noble Willingham).

Additionally, Alaimo had a recurring role on Hill Street Blues, as Gene Scapizzi, from 1985 through 1987. Besides series regulars Barbara Babcock, Barbara Bosson, Megan Gallagher, and James B. Sikking (with whom Alaimo had worked previously), other Star Trek alumni he worked on the series include Richard Herd, Gregory Itzin, Michael Keenan, David Selburg, Lawrence Tierney, and Kenneth Tigar.

Alaimo spent the majority of the 1990s focusing on his role as Gul Dukat for Deep Space Nine. He has not appeared in any other live-action TV role since Deep Space Nine ended in 1999; his only television performance since then was the voice of "The Dean of the Secret Order of Dirty Joke Writers" in a 2010 episode of Family Guy, created by Star Trek fan Seth MacFarlane.

In 1980, Alaimo was seen opposite Chevy Chase and Goldie Hawn in the romantic comedy Seems Like Old Times. In 1984, he had a role in the cult science fiction classic The Last Starfighter, also featuring Barbara Bosson and Meg Wyllie. And in 1988, he appeared in Clint Eastwood's fifth installment of the "Dirty Harry" film series The Dead Pool, also starring Louis Giambalvo, Ronnie Claire Edwards, and Kristopher Logan.

Alaimo's latest film credit to date was a brief appearance in the 1994 comedy Naked Gun 33 1/3: The Final Insult. Bill Erwin also appeared in this film. Since then, Alaimo has focused his attention on television (especially on his role as Dukat) and on stage. 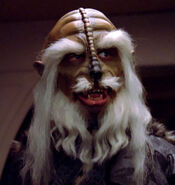 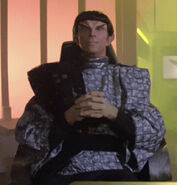 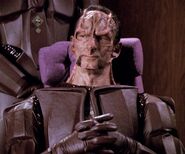 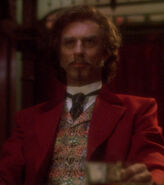 Pah-wraith possessing Dukat
DS9: "What You Leave Behind"