Marco Rodríguez (born 10 July 1953; age 67) is an actor who appeared in two episodes of Star Trek: The Next Generation. Footage from his first appearance was used for a scene in the final episode "All Good Things..." and Rodriguez can be briefly seen in the background on the computer monitor.

In 1996, Rodriquez played the role of Mr. DeMarco in the Jon Lovitz comedy High School High, which also featured Louise Fletcher, known for her role as Winn Adami on Star Trek: Deep Space Nine, and Nicholas Worth, whose credits include appearances on Deep Space Nine and Star Trek: Voyager. 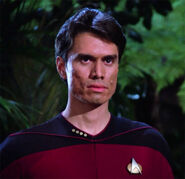 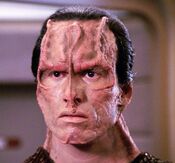 Glinn Telle
TNG: "The Wounded"
Add an image to this gallery

Retrieved from "https://memory-alpha.fandom.com/wiki/Marco_Rodriguez?oldid=2525345"
Community content is available under CC-BY-NC unless otherwise noted.