Maria Dykstra is an actress who was featured in several episodes of Star Trek: Voyager.

Her costume from "Infinite Regress" was later sold off on the It's A Wrap! sale and auction on eBay. [1] For the episode "Scientific Method", Dykstra filmed her scenes on Friday 1 August 1997, Wednesday 6 August 1997, and on second unit on Friday 5 September 1997 on Paramount Stage 8 and 9. Brad Look was her makeup artist on this episode.

In 1997, Dykstra worked as stand-in for Famke Janssen on the thriller City of Industry which also featured Brian Brophy, Jonathan Schmock, Eddie Matthews, and Tim Rigby. 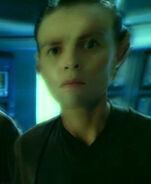 Retrieved from "https://memory-alpha.fandom.com/wiki/Maria_Dykstra?oldid=2420481"
Community content is available under CC-BY-NC unless otherwise noted.