Marianne Lewis is an actress, singer, and filmmaker who appeared as a Moab IV colonist in the Star Trek: The Next Generation fifth season episode "The Masterpiece Society". She filmed her scenes between Monday 11 November 1991 and Friday 15 November 1991 on Paramount Stage 9 and Paramount Stage 16. In addition, she appeared as a 19th century Human and an operations division officer in other episodes of The Next Generation. Her Starfleet uniform was sold off on the It's A Wrap! sale and auction on eBay. [1]

Beside her appearances on Star Trek, Lewis had featured parts in the comedy Other People's Money (1991, with Jeff Hayenga, Dale Kasman, and Denise Lynne Roberts), the video game Kriss Kross: Make My Video (1992), and the action thriller Collateral Damage (2002, with Rick Worthy, Raymond Cruz, Ethan Dampf, Don Fischer, Michael Cavanaugh, Clint Lilley, and Robert Alonzo). She was also featured in episodes of The Royal Family, West of Hollywood, and Strong Medicine, and had a recurring role in the comedy series Coach (with Kim Meredith and Michelle Horn and produced by Whoopi Goldberg).

In 2001, Lewis worked as writer, director, producer, composer, and leading actress on the short comedy Go with the Fro which also featured Star Trek: Voyager actress Elizabeth Goldstein. The film was the Best short winner at the Broad Humor Film Festival in 2006.

Lewis also worked on a number of stage plays including "Little Shop of Horrors" at the West Covina Playhouse, "Hair-The Revival" at the Heliotrope Theatre, "An American Cantata" at the Lobero Theatre, "Godspell" at the Victoria 5 Theatre, and "To Kill A Mockingbird" at the Glendale Centre Theatre. As a singer, she performed at the "Tour of Japan" and as lead singer for the band VooDoo Circus and as background singer for Seidah Garrett at the AidsWalk L.A. Concert.

She is the Music and Arts Director of the Agape International Choir in Beverly Hills and is teaching voice at schools. She is also the President and Founder of NuGroove Enterprises, a film and music production company. Lewis released three albums so far, "Mystical Renaissance", "Illumine", and "Love's Conspiracy". 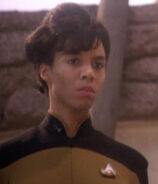 Retrieved from "https://memory-alpha.fandom.com/wiki/Marianne_Lewis?oldid=2415076"
Community content is available under CC-BY-NC unless otherwise noted.