Marijane Cole is an actress and stuntwoman who appeared in the final Star Trek: The Next Generation episode in 1994 and worked as actress and stand-in on several episodes of Star Trek: Enterprise. She received no credit for her appearances but is listed on the call sheets of the episodes. Cole filmed her scenes for "Broken Bow" on 5 June 2001 on Paramount Stage 18. Her Starfleet uniform from "All Good Things…" was later sold off on the It's A Wrap! sale and auction on eBay where she is listed as Mary Jane Cole on the name tag. [1]

Cole attended Edgewater High School in Orlando, Florida and graduated from the Samford University in Birmingham, Alabama. During this time she was an active swimmer, Played SU Tennis, Volleyball, Softball,Womens Basketball, and State ranked Badminton player. In 1990 she qualified for the Women's Pro Beach Volleyball Association Tour for two seasons. Cole studied acting at Samford University in Birmingham Alabama and later under coaches Debbie McLeod and John Lewis. She trained under Jim Vickers for film fighting and with Dan & Jan Bryant in sword play, is a Member of the Pro Drivers Association through Bobby Ore and Wally Crowder.

She was one of the stunt doubles for Daryl Hannah on the science fiction drama Attack of the 50 Ft. Woman in 1993; Patricia Tallman and Maria R. Kelly also worked as doubles for Hannah. In 1994 she worked for Ernie Orsatti on the television thriller Shattered Image in which she doubled leading actress Bo Derek and portrayed the featured part of FBI agent Hamilton. John Savage, Michael Harris, and Kevin Brophy were among the cast while Noon Orsatti performed stunts. Beside doubling actress Joan Allen in Oliver Stone's drama Nixon in 1995, Cole appeared in an 1996 episode of General Hospital as a prisoner and worked as stunt double for Elizabeth Marvel on the crime series The District, coordinated by Corey Eubanks, as double for Sarah Hagan on four episodes of Buffy the Vampire Slayer (2002-2004), as double for Elaine Hendrix on Charmed (2004, with Trampas Thompson and stunt coordinator Noon Orsatti), as double for Stephanie Romanov on Angel, coordinated by Mike Massa, and as double for Leslie Bibb on Crossing Jordan (2006, with Mark Muñoz).

Cole appeared in five episodes of the science fiction comedy series 3rd Rock from the Sun in 1996, as the Shhish Lady, and utlity stunts in 1998, and 2000. The first episode featured Trek actor Wayne Thomas Yorke and the second one Kathleen Garrett.

Further film work include the part of a bitchy bridesmaid in the independent film Jeremy's Egg (1999), utility stunts in the comedy The Hot Chick (2002) and stunt doubling for Daryl Hannah in the drama The Job (2003) and in the horror film Shark Swarm (2008, with Kevin Derr, Bevin Kaye, and Darlene Ava Williams). More recently she was interviewed for the documentary Tell Me About… (2009) along with Enterprise actor Joe Davis.

Beside her work in film and television Cole portrayed Vicki Vale in a Live Batman Stunt Spectacular show at Magic Mountain and as Cher for a Barry Manilow New Year Special at the Universal Amphitheatre. Her sports skills also snatched her roles in commercials for Health Net, Reebok, Miller Lite Beer, Arcoxia Pain Reliever, and a Body Blade informercial. Cole is a member of the Academy of Television Arts & Sciendes, the Screen Actors Guild, the American Federation of Television and Radio Artists, Hollywood Divers, and the Sunken Treasure Society. 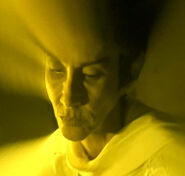 Vulcan nurse
ENT: "The Seventh"
(uncredited)
Add an image to this gallery

Retrieved from "https://memory-alpha.fandom.com/wiki/Marijane_Cole?oldid=2524149"
Community content is available under CC-BY-NC unless otherwise noted.