Mark Allen Shepherd (born 7 January 1961; age 61) is a background performer, an actor and artist from Rockville Centre, New York who is best known for his portrayal of the Lurian freighter captain Morn in Star Trek: Deep Space Nine. Throughout the seven year run of Deep Space Nine, Shepherd never received official credit and appeared in other background roles as well. He also portrayed Morn in episodes of Star Trek: The Next Generation and Star Trek: Voyager.

Shepherd received a Bachelor of Science degree in biology from Roger Williams University in Rhode Island which he attended between 1979 and 1984. After graduation, he moved to Southern California and studied at the California Institute of the Arts, focusing on music, film, theater, performance, and interdisciplinary arts between 1986 and 1990.

Shepherd is also an accomplished artist, and he has created numerous abstract impressionist paintings, mixing media types into photo mosaics. In his artwork, he likes exploring abstract concepts as energy, consciousness, perception, and multi-dimensionality. Indeed, twenty-three of his works have been used as set dressing on Star Trek: Deep Space Nine, including paintings in the quarters of Kira Nerys, Julian Bashir, Jadzia Dax, and Jake Sisko. [1] [2]

Shepherd appeared as Morn in every season of Deep Space Nine in heavy makeup, which took nearly two hours to apply. Once in costume, Shepherd was known to spend fourteen hours a day filming. His makeup artist was Vincent Niebla, who earned an Emmy Award for his work on Deep Space Nine. [3] [4] Although his character never uttered a word, Morn became a recurring character in the series, and even had an entire episode written about him. (DS9: "Who Mourns for Morn?") Interestingly, Shepherd appeared, without makeup, in this episode, and is asked to take Morn's seat at the bar when Morn is presumed dead.

An action figure of Morn was released by Playmates Toys. Shepherd was interviewed in 1996 in Star Trek Monthly issue 19 and in 1998 by Sue Schneider in Star Trek Monthly issue 46, titled "Voice of the Barfly". Another interview was printed in the 1995 magazine The Official Star Trek: Deep Space Nine Magazine issue 11, by Larry Nemecek and titled "Mark Allen Shepherd: Morn". Shepherd also gave interviews for the "Hidden file 10" on the DS9 Season 6 DVD and for "Morn Speaks" on the DS9 Season 7 DVD.

Outside Star Trek, Shepherd appeared as a pregnant Tenctonese in the Alien Nation film Alien Nation: Body and Soul (1995, with Gary Graham, Eric Pierpoint, Michele Scarabelli, Ron Fassler, Leon Russom, Tiny Ron, Glenn Morshower, Jeff Austin, Miguel Perez, Marva Hicks, and Bob Harks) where his make-up was done by Natalie Wood, as a diner guest with a red scarf in the Brooklyn Bridge episode "The Gift" (1992, with James Greene, Heidi Swedberg, and Christine Healy) where he also worked as stand-in for actor Louis Zorich, as Lenny in the comedy Babylon Vista (2001), and as a killer in the adventure Slow Motion Addict (2007).

In 2009, Shepherd voiced the role of Alex Miller on the fan-produced audio series Star Trek: The Continuing Mission. 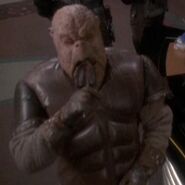 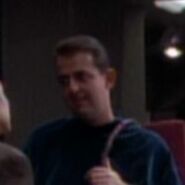 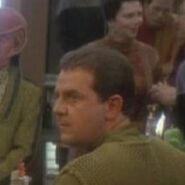 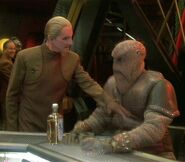