Multiple characters
Mark Chadwick (born 8 September 1961; age 60) is a stuntman who worked on Star Trek: Voyager, Star Trek: Enterprise, Star Trek Nemesis, and Star Trek. In 2010 Chadwick earned a Screen Actors Guild Award for Outstanding Performance by a Stunt Ensemble in a Motion Picture as part of the Star Trek stunt crew. The same year he received a Taurus World Stunt Award nomination in the category Best Fire for his performance on the film. His costume from the episode "Regeneration" was later sold off on the It's A Wrap! sale and auction on eBay. [1] [2] [3]

He has also performed stunts for such films as The Last of the Mohicans, Robocop 3, Air Force One, Alien: Resurrection, The Perfect Storm, Swordfish, We Were Soldiers, The Polar Express and The Aviator. He also did stunt work for several films based on Marvel Comics characters, including Spider-Man, Daredevil and the first two Blade films. He was awarded a Taurus World Stunt Award for a fire stunt he performed on another Marvel film, The Punisher. In addition, Chadwick does stuntwork for television shows. His past TV credits include The X-Files, Frasier, Profiler, Buffy the Vampire Slayer, and Charmed.

As an actor, he has performed small roles in films like Batman & Robin (co-starring John Glover), The Hot Chick and Date Movie. In 2000 he appeared as a circus performer in the TV movie Geppetto, which starred Trek regulars Rene Auberjonois and Brent Spiner and also featured Scarlett Pomers.

Chadwick performed stunts as the truck driver who tried to assassinate a witness in Christopher Nolan's Batman sequel The Dark Knight (2008). 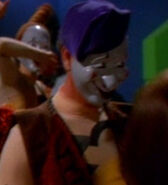 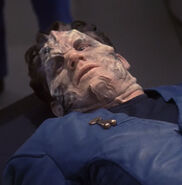