Mark Villwock Correy (born 13 June 1965; age 54) is an actor who appeared as the engineer Alex and several background aliens throughout the four-year run of Star Trek: Enterprise. For his appearances, Correy received no credit. Correy's sister Debbie Villwock is the mother of the twins Candace and Nicole Villwock who appeared in several film and television productions at a very young age, including the Star Trek: The Next Generation seventh season episode "Dark Page".

His acting work include supporting roles in the action film To Protect and Serve (1992), the drama Men of Honor (2000, with Ryan Honey and Leon Russom), the war drama Pearl Harbor (2001), Steven Spielberg's drama Catch Me If You Can (2002, with Thomas Kopache, Jimmie F. Skaggs, and Malachi Throne), the comedy Christmas with the Kranks (2004, with David L. Lander), and the comedy Fun with Dick and Jane (2005, with Ivar Brogger, Clint Howard, Kerry Hoyt, and Scott L. Schwartz).

More recently, Correy had a recurring background role in five episodes of the series Lie to Me (2010, with Conor O'Farrell, Benito Martinez, Erick Avari, and Patrick Fischler) and featured parts in episodes of Bones (2012, with Stephanie Erb) and Scandal (2015, with Steve Luna). 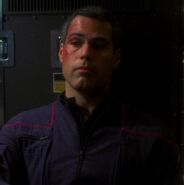 Alex
ENT: "In a Mirror, Darkly"
(uncredited)
Add an image to this gallery

Retrieved from "https://memory-alpha.fandom.com/wiki/Mark_Correy?oldid=2418096"
Community content is available under CC-BY-NC unless otherwise noted.