DeAlessandro is married to fellow stuntwoman Chandra De Alessandro since 2000, is a personal friend and stunt double of Sylvester Stallone for whom he doubled in over twenty films.

He has also doubled for stars such as Adam Sandler, Al Pacino, Robert Duvall, Charlie Sheen, Mickey Rourke, and Eric Roberts. Among his resume are also many television commercials and he was part of the original cast of the television show American Gladiators (1989-1990). 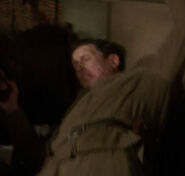