Clayton Rohner
"The quest for youth, Number One… so futile."
– Jean-Luc Picard to William T. Riker, 2364 ("Too Short a Season")

Mark Jameson was a career Starfleet officer in the 24th century. He joined Starfleet around the turn of the century, and he married his wife Anne in 2314.

By 2319, he had reached the rank of commander, and was sent to negotiate the release of hostages from Mordan IV. Officially, he successfully negotiated their release. However, in truth he supplied weapons to Karnas, the hostage-taker, in return for their release, and falsified the official records. This was a violation of the Prime Directive, so Jameson made an attempt to even things up by also supplying weapons to Karnas' rivals, thus causing forty years of civil war, although he claimed that he had assumed that the resulting conflict would only be a minor one that would last less than a year before it ended.

Jameson progressed through the Starfleet ranks, eventually becoming an admiral. His final command was the USS Gettysburg. He then contracted the incurable Iverson's Disease, and by 2360 was confined to a wheelchair. Unknown to anyone else, however, he had obtained two doses of an age-reversing agent from Cerberus II in exchange for a successful treaty negotiation. He began to slowly administer the medicine to himself. By 2364 he was living with his wife on Persephone V.

When Karnas reported a hostage situation on Mordan IV in 2364, he took both doses and embarked on the USS Enterprise-D to negotiate for their release, at Karnas' request, in an attempt to vindicate himself. The medicine caused him to rapidly get younger, but was also highly unstable, his unstable health prompting him to admit the truth to Picard, who acknowledged Jameson's responsibility for the current state of affairs while also noting that Karnas and others could have chosen to work for peace rather than simply continuing to fight.

After learning that the hostages had actually been taken by Karnas in an attempt to lure him to Mordan IV, he mounted an armed rescue attempt. This failed, and by the time he met Karnas face to face, he was dying from the effects of the drug. Karnas, on seeing Jameson die in front of him and on hearing of his attempts to atone for his earlier deeds, was satisfied and released the hostages. Jameson was buried on Mordan IV, at the request of his wife, and with Karnas' permission. (TNG: "Too Short a Season") 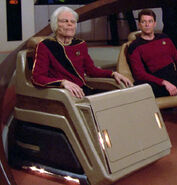 Jameson as an old man... 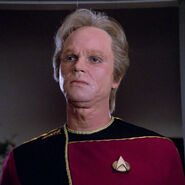 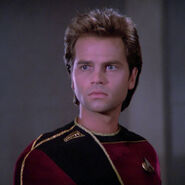 In the first draft script of "Too Short a Season", Jameson's first name was "Paul". [1] He was renamed "Mark" by the time the revised final draft of the script was issued. [2]

In a scene that was included in the revised final draft script of "Too Short a Season" but not in the episode's final edit, Jameson was mentioned to have been the commanding officer of the USS Falcon and the USS Pegasus, in addition to serving as an admiral. [3]

Mark Jameson was the second admiral to appear in Star Trek: The Next Generation, the first being Admiral Leonard McCoy. Jameson was also the first to wear the admiral's uniform seen throughout the rest of the first season of TNG. Though his rank insignia would seem to be below Savar and Aaron, all three are only ever referenced as "admiral".

He is also one of four characters to refer to Commander William T. Riker as "Number One" (the other three being Dr. Beverly Crusher, Sarek, and, of course, Captain Jean-Luc Picard).

Jameson appeared in his capacity as captain of the Gettysburg in the Star Trek: Terok Nor novel Day of the Vipers.