Mark L. Taylor (born 25 October 1950; age 69) is an actor who had two parts in episodes of Star Trek: The Next Generation and Star Trek: Voyager.

Taylor was born in Houston, Texas.

His acting career began in the late '70s, and Taylor has since made many television guest appearances, appearing in shows such as Ally McBeal, Home Improvement, Boston Public and Diagnosis Murder to name just a few. He performed in Melrose Place for two years, and has done quite a bit of voice work, as well as appearing in Dempsey (1983, with Sally Kellerman, Peter Mark Richman, Robert Harper, John McLiam, Estee Chandler and stuntman Jimmy Nickerson), Inner Space (with Robert Picardo), Arachnaphobia, Honey, I Shrunk the Kids (with Matt Frewer and Carl Steven), and High School Musical 2 (2007, with Robert Curtis-Brown). He provided the voice of Firestorm in the 1985 cartoon The Super Powers Team: Galactic Guardians along with Frank Welker, Rene Auberjonois and B.J. Ward.

More recent projects include the recurring role of Henry Silver in the drama series Saving Grace (2007-2010, with Leon Rippy) and guest roles in episodes of Ghost Whisperer (2009), The Glades (2010, with Dina Meyer and Bruce Davison), and Harry's Law (2011, with Gregg Henry and Christopher McDonald). He also worked as director, writer, and producer on the short comedy Hooking Up (2009) and as director on the television movie Den Brother (2010). 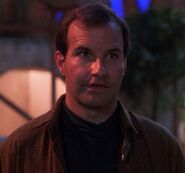 Haritath
TNG: "The Ensigns of Command" 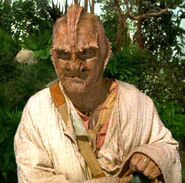 Jarlath
VOY: "Displaced"
Add an image to this gallery

Retrieved from "https://memory-alpha.fandom.com/wiki/Mark_L._Taylor?oldid=2525300"
Community content is available under CC-BY-NC unless otherwise noted.