Rogerson portrayed a doctor in the 2002 drama Laurel Canyon on which he also worked as stand-in for Christian Bale alongside fellow Star Trek double Julie David. He was the stand-in for Treat Williams on the action film Gale Force in 2002, which featured Cliff DeYoung, Nikita Ager, and James Cromwell, and worked as stand-in on the comedy The Shape of Things (2003) and Brian De Palma's thriller The Black Dahlia (2006, with Mike Starr, Patrick Fischler, James Otis, and Scott Barry).

Between 2004 and 2005, Rogerson appeared in three first season episodes of Desperate Housewives, playing a neighbor in the Wisteria Lane. He worked with Teri Hatcher, Mark Moses, and Brenda Strong. 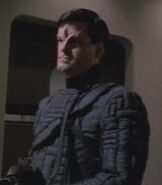 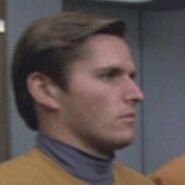 Retrieved from "https://memory-alpha.fandom.com/wiki/Mark_Rogerson?oldid=2415683"
Community content is available under CC-BY-NC unless otherwise noted.