T'Rul; Seska
Martha Hackett (born 21 February 1961; age 60) is an actress from Boston, Massachusetts, best known for her role of Seska on thirteen episodes of Star Trek: Voyager. She also appeared in two episodes of Star Trek: Deep Space Nine as a Romulan, portrayed a character in a deleted scene of the Star Trek: The Next Generation finale, and provided her voice in five Star Trek video games.

She won a Dramalogue Award for her acting in the theatrical production Barbarians and has appeared in King Lear, The Revenger's Tragedy, Tom Walker (2001), and Happy End (2005).

Hackett started her career as an actress in the late '80s with guest roles in episodes of Hill Street Blues (1986, with James B. Sikking, Megan Gallagher, Carlos Palomino, and Lawrence Tierney) and Hard Time on Planet Earth (1989, with Stan Ivar and Gregory Wagrowski). She then appeared in episodes of The Marshall Chronicles (1990, with Steven Anderson), Civil Wars (1991, with Matthew Faison, Barry Kivel, and Wallace Shawn), Sirens (1993), and Monty (1994, with Deborah Landis).

Among her early film work are the television thriller Flight of Black Angel (1991, with K Callan), the horror film Carnosaur (1993, with Raphael Sbarge, Clint Howard, and Frank Novak), the horror sequel Leprechaun 2 (1994, with Clint Howard and Mark Kiely), the drama In the Heat of Passion II: Unfaithful (1994, with Matt McCoy), and the drama One Night Stand (1995, with Gina Hecht and Diane Salinger).

Her entry into the Star Trek universe came when she auditioned for the role of Jadzia Dax on DS9. Although she didn't end up getting the part, which went to Terry Farrell, the producers did like something about her and she was called back to play the Terrellian pilot Androna in the series finale of TNG, "All Good Things..." Unfortunately, her storyline was cut from the final production. An image of her was printed in the Star Trek Monthly issue 26 and her costume from this appearance was sold off on the It's A Wrap! sale and auction on eBay. [1]

A few months later she was called in to play Sub-Commander T'Rul, a Romulan on Deep Space Nine, in the episodes "The Search, Part I" and "The Search, Part II". It was then a director called her, saying they wanted her for a role coming up later that season, on the new Trek series Voyager.

When brought aboard to play Seska, she was promised a recurring role though there was no guarantee of the number of episodes, and the writer had not fully figured out her character yet. All she was told about the character was that "she was a member of the Maquis, and she's not so happy with Janeway." It wasn't until her fourth appearance in "State of Flux" that she knew Seska was "more than a little unhinged," and she was perfectly fine with the fact her character was a villain. Said Hackett, "I had a lot of sympathy for her. As an actor, you have to look at it from your character's point of view, even if your character is a murderer." (citation needed • edit)

In 1995, Hackett found out that she was pregnant. Unsure about how this would affect her future on the show, she went to tell them and was told, "Wow! We're writing it in anyway." So she was very pleased at the interesting coincidence. Pleased after receiving the initial script for "Basics, Part II" in which Maje Culluh and her baby die, while she escapes in a pod 'to live to fight Voyager another day,' she was later disappointed at the rewrites (and eventually final) script where she died, and both of the others lived. But overall she was pleased with how Seska eventually turned out.

She was interviewed in The Official Star Trek: Voyager Magazine issue 7 (June 1996), Star Trek Monthly issue 34 (December 1997), and Star Trek: The Magazine Volume 1, Issue 11 (March 2000). Several costumes and costume components worn by Hackett during her time on Star Trek were sold off on the It's A Wrap! sale and auction on eBay including a pair of boots, [2] a shirt, [3] and a Starfleet uniform. [4]

During her time on Star Trek: Voyager Hackett also worked on other productions. She appeared as Kelly Monroe in the Touched by an Angel episode "Crisis of Faith" in 1997 with the late Christopher Pettiet and had featured parts in the independent film Inconceivable (1998, with Valerie Wildman), the romance Music from Another Room (1998, with David Carpenter, Don Pugsley, and Mel Green), the crime thriller Let the Devil Wear Black (1999, with Chris Sarandon, Jonathan Banks, and Tony Plana), the television science fiction film The Last Man on Planet Earth (1999, with Elizabeth Dennehy, Nancy Hower, Tamlyn Tomita, Azalea Davila and Cliff DeYoung, written by Kenneth Biller and directed by Les Landau), the comedy Never Been Kissed (1999, with Cress Williams, David Doty, and Jennifer S. Parsons), and the fantasy drama A Question of Faith (2000, with Randy Oglesby and Kenneth Tigar).

Following the birth of her second child in late 2000 Hackett had guest roles in episodes of Strong Medicine (2001, with Jack Donner, Jill Jacobson, and Joanna Miles), The Guardian (2002, with Raphael Sbarge and Earl Billings), and The Division (2003, with Eugene Roche). Film credits include the television western The Lone Ranger (2003, with Jeffrey Nordling and Sam Hennings) and the action comedy Kiss Kiss Bang Bang (2005, with Corbin Bernsen, Christopher Gilman, Brian Simpson, Cole McKay, Ben Bray, and Azalea Davila). In 2004 Hackett was divorced from her husband Tim Disney, a director, producer, and writer.

After an acting break of two years, Hackett returned on screen in 2007 when she had a guest role in the The Riches episode "Been There, Done That" alongside fellow Trek performers Todd Stashwick, Gregg Henry, and Bruce French. The same year she portrayed a grieving widow in the Dexter episode "An Inconvenient Lie". For this appearance, Hackett received no credit but performed along Trek actors Don McManus and Keith Carradine.

In 2009, she portrayed inmate Celia Roberts in the NCIS episode "Caged" which also featured Stephanie Niznik and stuntman Panuvat Anthony Nanakornpanom. More recently she portrayed the author Siona McCabre in the fantasy vampire webseries I <3 Vampires (2009-2010). Hackett portrayed her character in six episodes. [5] 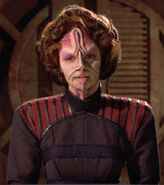 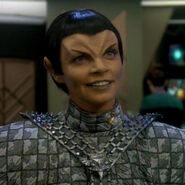 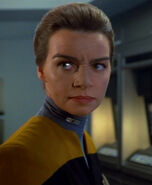 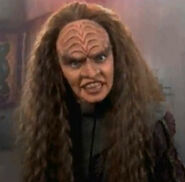