Matulis' first step into the Star Trek universe was in Star Trek: Insurrection in which he played one of the main core Ba'ku for four months and acted on the locations at Woodland Hills, Lake Mammoth, and at the Paramount Studios. Matulis worked as the fitting model for the Reman warrior costumes during the design phase of Star Trek Nemesis and later appeared as one of the Remans in the film. He also appeared in several episodes of Star Trek: Enterprise in which he played several Xindi and wore the re-used costume from Star Trek: Nemesis which was sold off on the It's A Wrap! sale and auction on eBay. [1] [2] Another costume worn by Matulis in the episode "Judgment" was also sold off. [3]

Matulis performed in several stage plays and provided his voice to radio spots. He acted in the independent films The Last Moments and Arcane Bagatelle and appeared in the television series The Amanda Show, with regular guest actor Andrew Hill Newman.

He portrayed a Sleestak in the science fiction film Land of the Lost (2009, with Douglas Tait, Michael Papajohn, and Leonard Nimoy) and a creature in the television fantasy film Captain Cook's Extraordinary Atlas (2009, with stunt coordinator Greg Barnett). For the short film Je dis non, Ali (2008) he worked as sound designer, associate producer, visual effects artist, and actor. He also worked as visual effects consultant for the short comedy Dirty Words: The Letter C (2008) and as editor for the short comedy A Definite Maybe (2004) and for the family series Puppy Plays the Classics (2008).

In 2018, Matulis appeared as one of the jail observers in the music video of Christina Aguilera and Demi Lovato "Fall in Line". [4] 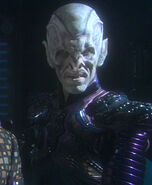 xB worker
PIC: "The Impossible Box"
Add an image to this gallery

Retrieved from "https://memory-alpha.fandom.com/wiki/Marti_Matulis?oldid=2704386"
Community content is available under CC-BY-NC unless otherwise noted.