Martia was a female chameloid imprisoned on the Klingon penal colony Rura Penthe.

In 2293, she was part of a plot to kill Starfleet Captain James T. Kirk and Dr. Leonard McCoy who were imprisoned at Rura Penthe after their conviction for assassinating the Klingon Chancellor, Gorkon. The plot consisted of Martia "helping" the two Starfleet officers escape the penal colony and get beyond its magnetic shield which prevented transporter use. Kirk and McCoy were then to be killed "while attempting to escape." For her part in the conspiracy, Martia was promised a full pardon.

Martia, while appearing as Kirk, was killed by the Klingon commandant of the colony shortly before Kirk and McCoy were rescued by the starship Enterprise. (Star Trek VI: The Undiscovered Country) 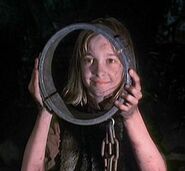 Martia, appearing as a small Human girl
Add an image to this gallery
Retrieved from "https://memory-alpha.fandom.com/wiki/Martia?oldid=406670"
Community content is available under CC-BY-NC unless otherwise noted.