Holographic Man; Risian masseur; Tortured Kyrian
Martin Squires is a former actor who appeared in episodes of Star Trek: Deep Space Nine and Star Trek: Voyager. He received no credit for his appearances and was identified by the call sheets of the episodes.

Squires also appeared in an episode of Baywatch (1995, with Gregory J. Barnett) and in the drama Boy Culture (2006, with Derek Magyar).

He appeared in the January 1996 edition of the magazine Playgirl where he was named Playgirl man of the month. For the April 1996 edition he was photographed by Dean Keefer for the picatorial "Dream Lovers: Forbidden Fruit" and he also appeared in the November 1996 edition in the article "Vote for Man of the Year 1997". [1] During this time, Squires was also one of the Chippendale dancers. [2]

Squires was raised on a farm in Georgia and served six years as a petty officer of a SARS Team in the US Navy between 1987 and 1992. He attended the UCLA and received his certificate as personal trainer, fitness instructor, and lifeguard. He also traveled for ten years as a professional dancer besides acting. In 2000, he has founded his own company, the Kapowui Surf Club, located at 300 Ocean Front Walk in Venice Beach, California. [3] As aquatic safety trainer and ISA surf coach, he owns and manages this surf club which he started out of a van. [4] [5] 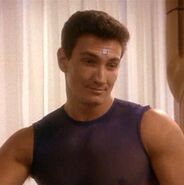 Risian masseur
DS9: "Let He Who Is Without Sin..."
(uncredited)

Retrieved from "https://memory-alpha.fandom.com/wiki/Martin_Squires?oldid=2541528"
Community content is available under CC-BY-NC unless otherwise noted.