According to the call sheet, De Baca filmed his scenes for "The Xindi" on Tuesday 1 July 2003 on Paramount Stage 9. The call sheet is listing him as "Marvin Debbacca".

Besides his work on Star Trek, De Baca was featured as a murder victim in an episode of Close to Home. Here he worked with Trek assistant director Michael DeMeritt. [1] 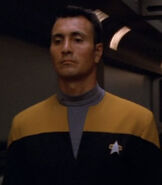 Alien mine guard
ENT: "The Xindi"
(uncredited)
Add an image to this gallery

Retrieved from "https://memory-alpha.fandom.com/wiki/Marvin_De_Baca?oldid=2526055"
Community content is available under CC-BY-NC unless otherwise noted.