Meinel-Newport filmed her scenes for "Non Sequitur" on Tuesday 25 July 1995 and Wednesday 26 July 1995 on location at the New York Street lot and is listed as "Bolean Pedestrian" on the call sheets.

Mary grew up in a family of seven children. She lives in Tucson, Arizona with her husband, Gerald David "Jerry" Newport. The two have Asperger's syndrome, a mild form of autism. From previous relationships, she has two sons, Stephen and Peter, and two grandchildren. Mary and Jerry Newport's relationship was the subject of a 1995 LA Times article, which became the inspiration for a 2005 film called Mozart and the Whale – the same name of a January 2007 autobiography written by the Newports (along with Johnny Dodd) entitled Mozart and the Whale: An Asperger's Love Story. The Newports also wrote a book called Autism – Asperger's & Sexuality: Puberty and Beyond, which was released in July 2002.

Meinel-Newport also appeared on Babylon 5 as a Centauri female (a series that starred Bill Mumy and Andreas Katsulas), and was interviewed twice on 60 Minutes, in both 1996 and 2004. 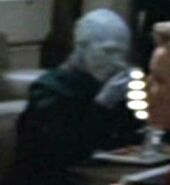